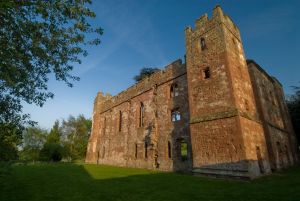 The extensive remains of a fortified tower house built by Edward I's Lord Chancellor, Robert Burnell, Bishop of Bath and Wells. The castle was built between 1284-1293, using local red sandstone. It replaced an earlier house on the site, where Burnell had been born. Burnell also built the Bishop's Palace at Wells, which is similar in design to Acton Burnell Castle.

Bishop Burnell's influence was such that this little Shropshire village hosted Parliaments twice, in 1283 and again in 1285. On the first occasion, Edward I was visiting Burnell when he summoned one of the first Parliaments to include members of the Commons. They may have met in the nearby barn. One outcome of this Parliament was a new law meant to protect the rights of creditors. This law has since been known as the Statute of Acton Burnell.

Bishop Burnell rebuilt the nearby parish church, and, unusually, laid out the village according to a formal plan. The castle was used as a family residence until 1420 and remained in the Burnell family's possession until it was seized by Henry VII in 1485.

Henry gave Acton Burnell to the Earl of Surrey in recognition of his leadership at the Battle of Flodden. It later passed to the Duke of Norfolk, and eventually to the Smythe family. In the 18th century, the Smythes built Acton Burnell Hall nearby and made that their residence, so the castle fell out of use.

The castle's residential block was rebuilt as an ornamental building (what we might today call a folly) in the parkland surrounding the Hall. It now stands as a large shell, two stories high, and is surrounded by traces of a moat on three sides. The castle that we see today is only Bishop Burnell's private apartments, a small part of the original castle complex.

A short distance away is the parish church, which contains some wonderful memorials to the owners of Acton Burnell Castle over the centuries.

Acton Burnell Hall is now a school, but access to the castle and church is permitted at any reasonable time. 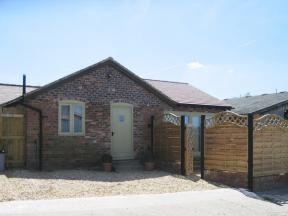 This pet friendly, barn conversion cottage on a working farm sleeps 4 people in the Shropshire village of Acton Burnell just 7 miles from the historic market town of Shrewsbury …
Sleeps 4