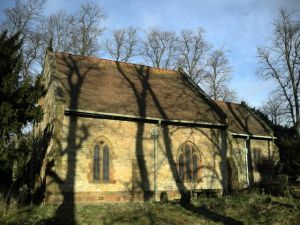 Brownsover, St Michael's Church
Though St Michael's dates to the 12th century, the current building is almost entirely the result of a Victorian renovation executed by Sir George Gilbert Scott for the Boughton-Leigh family of Brownsover Hall.

To Scott's credit, his work at Brownsover remained true to the original medieval form and feel of the original church.

When the church was rebuilt it stood in the rural village of Brownsover, but the growth of Rugby has swallowed up the village.

The nave is a simple rectangle of stone rubble dressed with reddish freestone at the quoins, under a steeply pitched roof. There is no tower, just a gabled bracket holding a single bell situated below the west gable, over the door. At the east end is an equally plain rectangular chancel, with a brick extension at the north-east angle. Windows were inserted in the church walls in the late 13th century.

The church interior has whitewashed plaster walls and polychrome tiles on the floor. Set into the south wall is a piscina. The oldest feature is a circular 13th-century font with a moulded base and small tub bowl. The chancel arch may also be 13th century.

The highlight of the interior is the sheer volume of excellent woodwork spanning several centuries. Among the best is the 1660 organ case, which was originally built for St John's College, Cambridge.

On the chapel floor is an inscription commemorating John Hawkins (d. 1678), the great-nephew of Lawrence Sheriff, who founded Rugby School. The 20th century stained glass in the east window commemorates Sheriff himself. It is the only coloured glass in the entire church.

The wooden screen dates to the 15th century and the 18th-century pulpit is Flemish, with 17th-century panelling at its back.

St Michael's was not originally intended as a parish church, but as a chapel of ease to the parish church of Clayton-in-Dunsmore. Despite the Victorian restoration, the church has changed remarkably little since it was built.

It long ago ceased service for regular worship and is now in the care of the Churches Conservation Trust. The church is in a cul-de-sac off Brownsover Lane, near Brownsover Hotel.

The Granary at Fawsley - 12.9 miles
Daventry, Northamptonshire
Stay from: £50.00