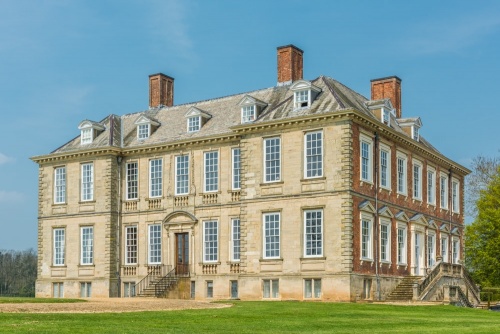 Stanford Hall stands on the west bank of the River Avon, just inside the county of Leicestershire, and has been the home of the Cave family since 1430. The family has the unusual privilege of being able to pass the Braye peerage through either the male or female lines.

The medieval manor inhabited by those first Caves was pulled down in 1690 by Sir Roger Cave to make way for a lovely William and Mary mansion, begun by William Smith of Warwick the elder and finished by his son, also named William. Three sides of the Hall are built of red brick but during the 18th-century the south facade was refaced in elegant pale stone.

The house displays fine furniture and collections of family treasures accumulated over the centuries. Chief among the artwork on display is a collection of royal Stuart portraits. The Ballroom features a richly painted, coved and gilded ceiling with trompe l'oeil shell corners.

There are family costumes on display, including a series of embroidered waistcoats. 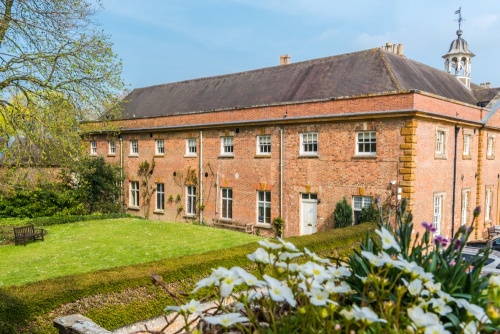 Visits to Stanford Hall are by guided tour only. Our tour took about 45 minutes and was led by an extremely knowledgable and entertaining guide who seemed to know every historical detail about the house and the Cave / Braye families that lived here over the years. Here are the highlights of the tour:

The tour started in the Library, just off the Marble Entrance Hall. The Library holds over 5,000 books, and these were being meticulously cleaned, page by page, at the time of our visit. In a display case by the window is a diary by a Cave ancestor who was present at the trial of King Charles I.

Another fascinating object in this room is the largest padlock I have ever seen, used to secure a very early motor car to fence railings when Lord Braye was called to visit the royal family in London. Also on display is the detailed accounts by William Smith of Warwick for the building of Stanford Hall. His final bill was £2,137.10s.7d. 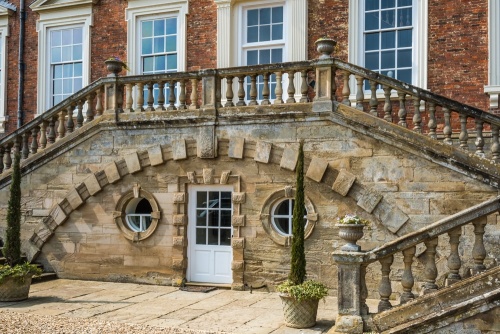 The finest room in the house is the gilded Ballroom, with a beautifully coved ceiling painted with allegorical paintings of classical myths. In the centre is Apollo at the core of a sunburst. The corners of this ceiling are decorated with trompe l'oeil paintings depicting shell patterns.

This beautiful chamber holds most of the royal Stuart portraits brought to Stanford in 1842 by Lady Braye, who came across them for sale in Rome. One of the most interesting portraits is a rare depiction of Bonnie Prince Charlie in exile, after the failure of his 1745 attempt to seize the throne. In a display case are more items connected to the Stuarts, including a set of prayer beads owned first by Mary, Queen of Scots and later by Bonnie Prince Charlie.

Beyond the Ballroom (and reached by a hidden door) is the dining room, notable for its collection of porcelain. One of the pieces on display is a Staffordshire pottery cat, made in 1730. The cat is one of a set of two, and the other is in Buckingham Palace. According to our very entertaining guide, Queen Mary once enquired about the cat before a royal visit to Stanford Hall.

The Queen had a reputation for saying she liked something in her host's possession, and the host then felt obliged to offer it to her. When the Braye family heard that she was interested in the porcelain cat they hid it in the base of a longcase clock and told the Queen that it was lost. Years later, one of the family was at a social gathering with the royal family and one of them remarked to him, 'Braye, you've still got our cat!', to which Braye quickly replied, 'No sir, you've still got our cat!'. 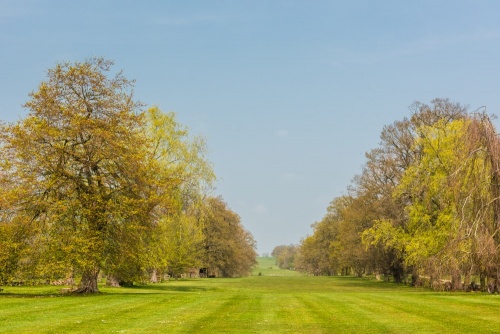 The long tree-lined avenue behind the Hall

Once the dining room, this large chamber now houses a full-sized billiard table. The walls are lined with wonderful Tudor linenfold panelling salvaged from the medieval manor house. In a corner are large display cases with some of the family's prized possessions.

Among these possessions are a 1629 Bible and Book of Common Prayer in embroidered crimson silk covers. The covers were embroidered by Eleanor Roe, the daughter of Sir Thomas Cave and wife of Sir Thomas Roe, in gratitude for delivery from a storm at sea on the couple's return from a trip to Turkey. They had been forced to flee the country after Eleanor managed to fend off the improper advances of the Pasha.

The core of the house is taken up by a wonderful cantilevered staircase built by the younger Smith of Warwick. When Smith was called upon to create the staircase it was meant to be in stone, but when he investigated the structural integrity of the walls he quickly decided that they would not support the heavier stone stair and convinced Lord Braye to opt for the elegant wooden stair we see today. The staircase is lined with family portraits going back to Tudor times.

Perhaps the most interesting portrait is that of Sir Ambrose Cave, wearing Queen Elizabeth I's garter on his arm. The story goes that the Queen dropped her garter and Sir Ambrose retrieved it. He handed it back to her but she refused it, bidding him to keep it. He swore that he would wear it always in her honour and tied it to his sleeve. Apparently, he was true to his word and always appearing in public wearing the Queen's garter. 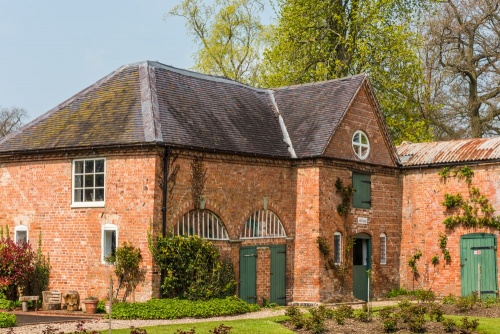 The tour takes in two bedrooms on the first floor. One of these is a small chamber at the top of the stairs, notable for a 16th-century portrait of Mary, Queen of Scots in a heavily gilded frame by the door. The painting is full of symbolism and shows Mary with her eyes in line with an English coat of arms, a signal that she had a claim to the English throne.

Among the exhibits at Stanford Hall is a life-sized replica of 'The Hawk', a remarkable winged flying machine invented by Lt. Percy Pilcher, a friend of Lord Braye of Stanford. Pilcher was killed while flying The Hawk at Stanford in 1899.

Pilcher's unpowered flight took place a year before the Wright brothers more famous unpowered attempt and several years before the Wrights made their breakthrough engine-powered flight at Kitty Hawk. The replica flying machine and an exhibition on Pilcher are located in the stable block. A memorial column commemorating Pilcher stands in Monument Field, a short walk from the house. 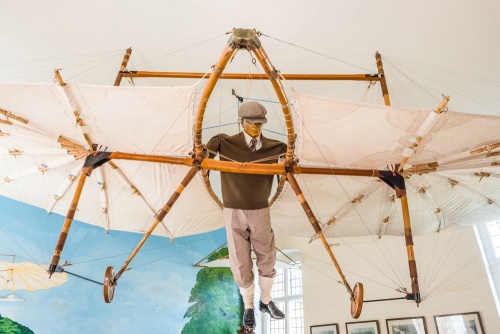 The replica of Percy Pilcher's 'Hawk' in the stables

The house stands in lovely grounds featuring a rose garden behind the stable block. On one side of the rose garden is the Old Forge, where you can see blacksmith's equipment and tools as well as iron objects made on the site.

Across the River Avon (and thus, across the county boundary in Northamptonshire) is the parish church of St Nicholas, with monuments to generations of the Cave family and a wealth of funeral hatchments. Beyond the church is the site of the deserted medieval village of Stanford on Avon, now visible only as bumps in a turf-covered field.

Stanford Hall is a delight to visit. It is not a museum piece but a family home, with a wonderfully relaxed atmosphere. 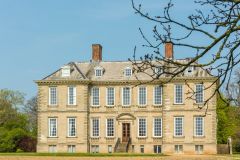 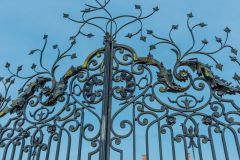 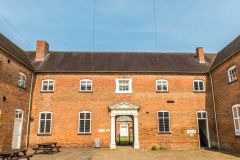 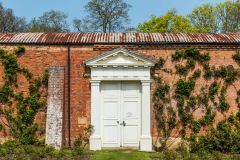 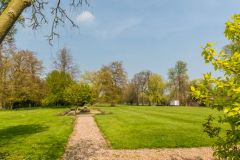 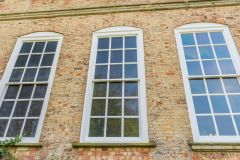 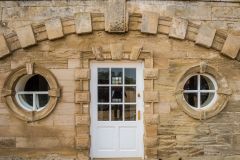 More self catering near Stanford Hall >>

The Granary at Fawsley - 13.9 miles
Daventry, Northamptonshire
Stay from: £50.00

This red-brick detached farmhouse is situated in the village of Shawell in the town of Lutterworth and can sleep eight people in four bedrooms.
Sleeps 8