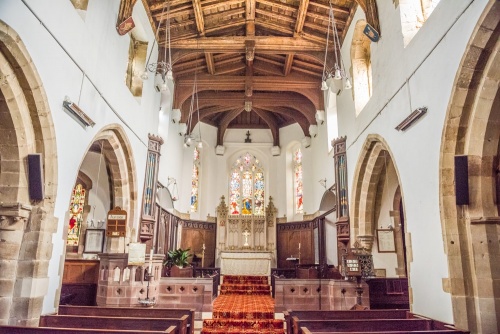 The pretty Leicestershire village of Swinford was recorded in the Domesday Book of 1086 when there were 7 manors listed. There was no church recorded, but it seems likely that there was one given the large number of manorial estates.

There is no firm evidence of a Saxon building, but it is possible that the first two bays of the present church nave incorporate early Norman or late Saxon stonework.

We are on firmer historical ground when it comes to the 12th century, when the present church was built (or rebuilt). That 12th-century church was very small, taking up the space from the tower arch to the end of the second bay, with an apsidal chancel to the east. In the middle of the 12th century (roughly 1150-1160) the north wall was opened up to provide an arcade and a north aisle added.

One surviving Norman feature is the circular font, made of red sandstone from Keuper in Warwickshire. The font is carved with traditional Norman chevron decoration and blind arcading. The font bowl is supported by five stems, or feet, each in a different style. None of the feet is original to the font. One of the feet was found during restoration work being used as a step in the tower. 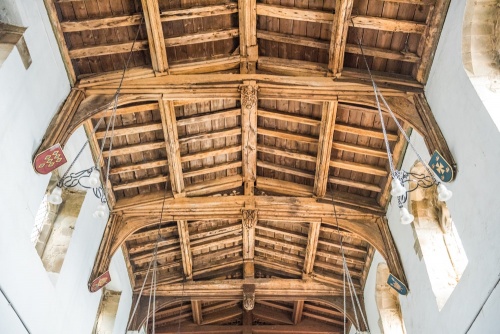 In the 1190s Robert Revel granted the church and 160 acres of land to the Knights Hospitallers. The next major change came in the 14th century when the south aisle was added in Decorated Gothic style. The nave was lengthened to three bays and the north aisle widened and extended. One reminder of this 14th-century rebuilding is a piscina in the south aisle wall dated to the period 1330-1350.

In 1481 a wealthy landowner named Nicholas Cowley left money to establish a chantry and pay for a priest to say prayers for his soul. He also gave money for a Chantry house, thought to have been attached to the chancel.

In 1778 the medieval chancel was torn down and replaced by the present small, windowless apse. The apse was windowless to keep down maintenance costs. The chancel was rebuilt in 1894 - despite opposition from several parishioners. 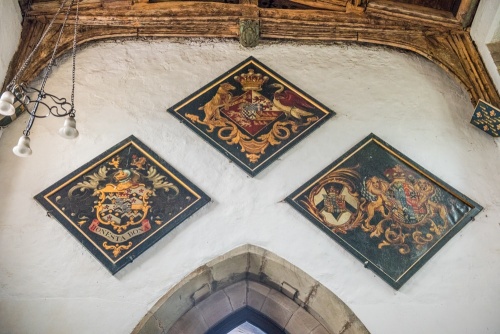 The church has an excellent collection of 20th century stained glass by the famous London firm of Clayton & Bell, given by Richard Spencer.

Above the tower arch are three funeral hatchments for the Cave family of Stanford Hall, a few miles distant (there are many more Cave family hatchments at the church in Stanford on Avon). These three are copies of ones in Stanford and were hung outside the family's London residence. The most interesting hatchment is that of Sarah, the 3rd Baroness Braye (d. 1862). It has a remarkable 35 quarterings, the most of any hatchment in Leicestershire.

Perhaps the most interesting historical feature apart from the font is the wonderful 15th-century nave roof, with moulded beams and trusses with carved bosses. On the truss ends are heraldic coats of arms painted by a Victorian vicar. The restored north aisle roof also retains some medieval timbers. 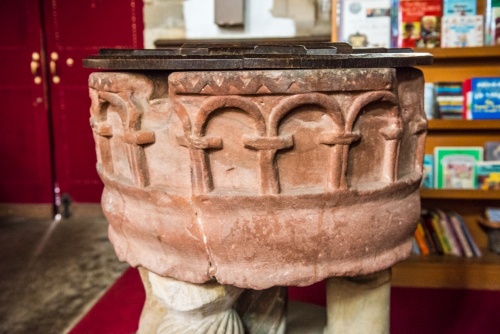 Other interior features include a worn carved head on one side of the chancel arch and a brass benefaction board on the north wall recording the gift of £2,000 from Baroness Braye in 1858. The money was to be invested by the vicar and churchwardens, with the income used to provide clothing and fuel to eight poor women. At the east end of the north aisle is an old parish bier for carrying coffins.

There is a ring of four bells in the west tower, the oldest dated to sometime around 1550. This bell does not have an inscription, but rather a portion of the alphabet runs around the bottom. It seems likely that the craftsmen casting the bell thought it prudent to avoid any kind of religious inscription which might be considered controversial given the religious turmoil of the period. The bell-frame itself dates to the early 17th century.

All Saints is a delightful rural church with some very good historical features, notably the Norman font and the 15th-century nave roof. The church was open when we visited - though we did meet the vicar on our way out just after 4pm, on his way to lock up. 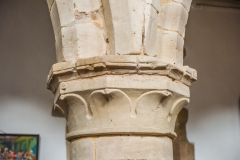 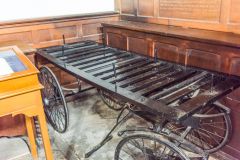 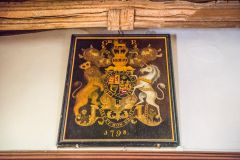 More self catering near Swinford, All Saints Church

The Granary at Fawsley - 13.9 miles
Daventry, Northamptonshire
Stay from: £50.00

More bed and breakfasts near Swinford, All Saints Church