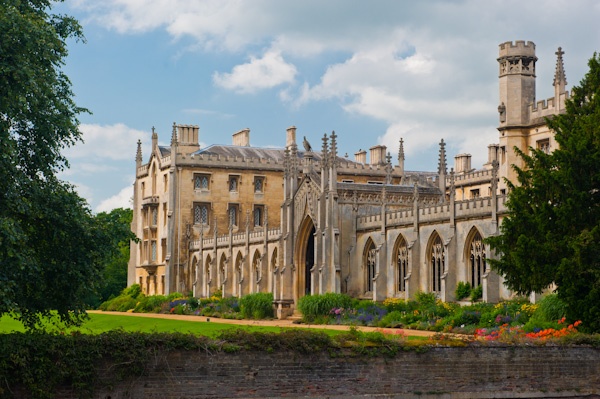 St John's was founded in 1511 - officially by Lady Margaret Beaufort, mother of King Henry VII. In truth, though Lady Beaufort was in favour of the plan, she died in 1509, and it was through the efforts of John Fisher, Bishop of Rochester, that permission was obtained from Henry VIII, the pope, and the Bishop of Ely.

The college was founded on the site of the early 13th-century Hospital of St. John, and the official name was The College of St. John the Evangelist.

The front gate of the college dates to 1516, though the linenfold doors are 17th century, and the coat of arms of Margaret Beaufort is carved above the entrance. Fairest Court is the oldest part of the college, built in the years 1511-20 to contain all the necessary buildings of a residential college, including living quarters, kitchen, library, and hall. During the Civil War First Court was used as a prison.

The chapel on the north side of First Court is a Victorian replacement for the old hospital chapel. In the middle of the west range is a statue to Margaret Beaufort, erected in 1674. 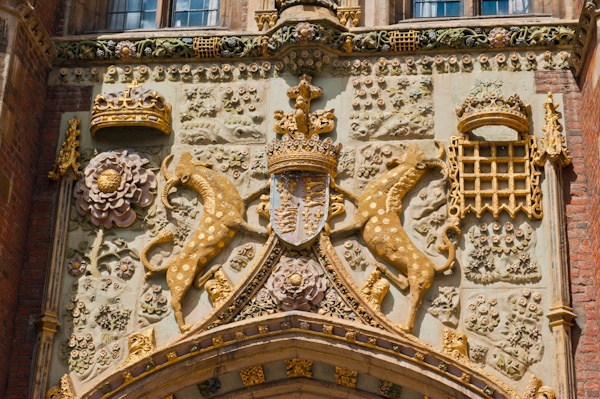 The Beaufort coat of arms on St John's gatehouse

St. John's Chapel is yet another Cambridge work by George Gilbert Scott. Scott was heavily influenced by the design of Sainte Chapelle (Paris, 13th century). The tower was an afterthought, erected after an alumnus of the college promised to foot the bill -- he died in a railway accident before coming up with the cash!

The oldest feature of the chapel is the tomb of Hugh Ashton (1522), one of the first alumni of the college. He is carved in both his gowns and as a grotesque corpse. A picture pun is carved into the tomb railings; an ash tree emerging from a tun (barrel) giving ash + tun, or "Ashton". The painted Victorian ceiling (recently restored) shows notable Christians from the 19th and 20 the century.

The Second Court is a product of the 1590s and presents a wonderfully unified example of this late Elizabethan style of architecture. Look for the statue and coat of arms of the Countess of Shrewsbury on the Shrewsbury Tower to the west. The Countess was a major benefactor in the building of the court.

On the north range is an oriel window with a stained glass portrait of Queen Henrietta Maria, whose engagement agreement to Charles I was signed in the room below.

Third Court is composed of the old Library and two late 17th century ranges. Look for the large window at the join between the library and the cloistered range. There is nothing behind the window! It is merely an ingenious architectural device to hide the place where the buildings meet. 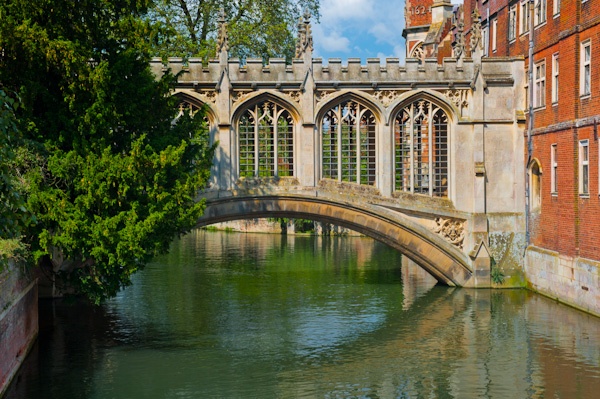 THE BRIDGE OF SIGHS

From the door in the south range you can look out over The Backs, and get a good view of the Bridge of Sighs to the north. The Bridge connects Third Court to New Court across the river Cam.

It is supposedly a copy of the Bridge of Sighs in Venice, so called because it led prisoners to gaol. It really doesn't resemble its namesake very much, other than in the fact that both are covered bridges, but it presents perhaps the archetypal "traditional" view of Cambridge. 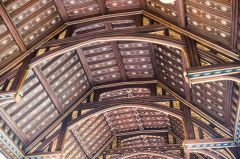 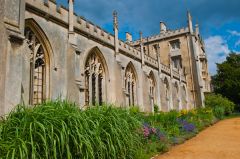 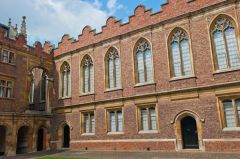 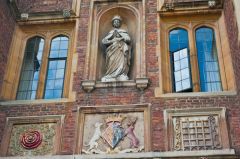