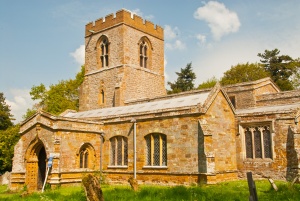 There has probably been a church in Yelvertoft since before the Norman Conquest, but nothing remains of that earlier building. The nave and chancel are 12th century and are constructed of local cobblestones. The west tower was added in the 13th century, when the east chancel wall was rebuilt.

The most intriguing historic feature of the church is in the chancel, where half the north wall is taken up by an elaborate tomb in Perpendicular style, probably dating to the 15th century.

Within the tomb niche lies an alabaster effigy of a priest, thought to be John Dycson (Dixon), who served as rector from 1439 to 1445. Though worn, the carving is very detailed and finely crafted, and you can easily make out details of the priest's costume. Traces of paint still cling to the effigy, and it is interesting to imagine how colourful it would have been when it was new.

If you take the time to look outside the church you can see that the wall beneath the north window (that is, directly aligned with the tomb) is decorated with 28 heraldic escutcheons. These surely were placed here intentionally at the same time as the tomb as part of the same commemoration? 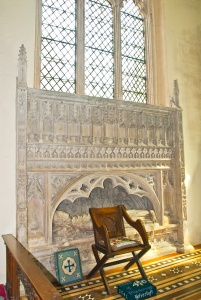 Look down at the floor in front of the tomb and you will see that it is covered attractive Victorian tiles, thought to be Minton.

On the opposite wall of the sanctuary is a fascinating three-seat sedilia, where church officers would sit during services. The columns separating the seats are strangely worn, or eroded, as if they had been badly damaged by weathering.

A local story suggests that the damage was caused by Cromwell's soldiers during the Civil war, who used the sedilia to sharpen their swords before the Battle of Naseby, which took place about 5 miles from Yelvertoft.

I must say the strangely damaged columns don't look like they've been worn by swords, but what would account for weathering on stone found inside the church?

In the chancel is a wall memorial to John Watkin (d. 1772), and other 18th century monuments are in the south chapel. Several of the pew ends in the nave have nicely carved end panels; these were installed in 1870 from another church but certainly appear to be of 16th-century date.

On the south wall is a touching memorial to airmen lost when two Allied aeroplanes collided outside Yelvertoft during WWII.

All Saints is an attractive country church, with an interesting medieval tomb niche and that puzzling sedilia to puzzle amateur historians. 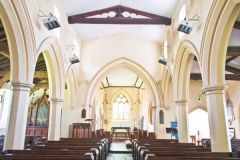 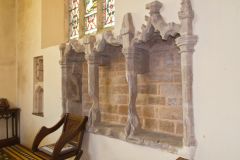 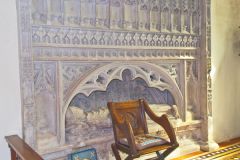 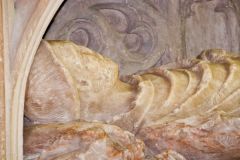 More self catering near Yelvertoft

The Granary at Fawsley - 11.6 miles
Daventry, Northamptonshire
Stay from: £50.00

More bed and breakfasts near Yelvertoft