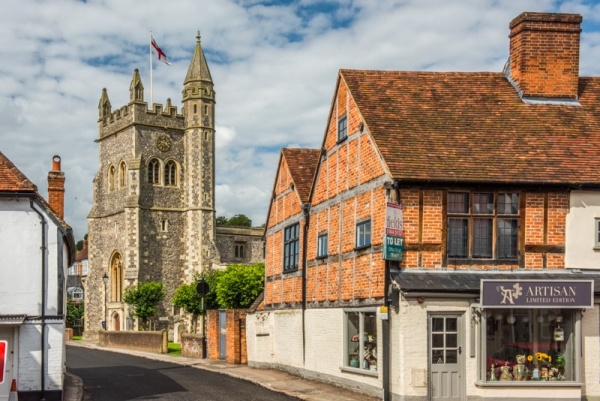 The parish church of Old Amersham dates to around 1140 but much of the building we see today dates from a 13th-century restoration and 14th-century additions. The south porch and tower were added in the 15th century. The tower is notable for its octagonal stair turret decorated with spirelets.

The church was given by Geoffrey de Mandeville, the 1st Earl of Essex, to the monks of Waltham Abbey. The first known rector was William de Faconbridge who was appointed in 1222.

The church was restored in 1890 with the exterior walls were refaced with ashlar dressings and knapped flint.

Look up as you pass through the 15th-century porch. The roof is finely vaulted and the bosses are decorated with the Tudor rose symbol. 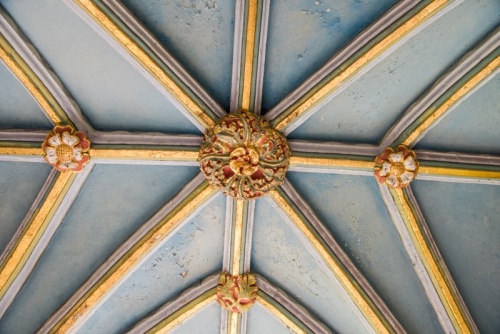 15th-century bosses in the south porch

The nave roof is 15th century, but most of the windows hold 19th-century stained glass. The exception is the colourful east window, which has 17th century Flemish glass, given by Sir William Drake in 1760.

In St Catherine's Chapel is a window by the famous stained glass artist CE Kempe. Look for his trademark wheatsheaf symbol and a small tower, the symbol of his nephew Walter Tower. Also in the chapel are 17th-century floor monuments to the Bent and Proby families.

The font dates to around 1310. It is not original to this church but was installed when the original medieval font was removed during a Victorian restoration.

On the north wall are some 14th-century floor tiles that were found at the west end of the nave.

In the south transept is a 14th century arch over a tomb recess. Within the recess is a floriated stone slab dated 1350.

St Mary's played its part in the Protestant Reformation, for it was here that reformer John Knox preached his last sermon before fleeing overseas to escape punishment from the ardently Catholic Queen Mary. 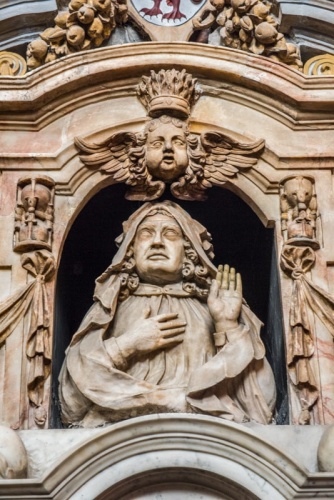 The church features numerous memorials, many to the Drake family, whose chapel on the north side of the church dates to the 17th century. The local Drake family may have been related to the famous Elizabethan sea captain Sir Francis Drake.

The Drake Chapel is elevated several steps above the north side of the chancel. The space was originally used as the vestry but in 1728 the Lord of the Manor died and it was found that there was not enough room for his burial and his proposed monument in the chancel. The corpse was temporarily interred in the choir and the Drake family petitioned the Bishop of Lincoln to transform the vestry into a family chapel.

The Bishop agreed on the condition that the Drakes build a new vestry. This they did and the old vestry became the family chapel, with generations of Drakes commemorated by some outstanding monuments. The chapel floor was raised above the rest of the church to make room for burials vaults

In 1811 the chapel was found to be too small for any more burials and again the family petitioned to enlarge it. The extension doubled the chapel's size and allowed interments well into the 20th century. 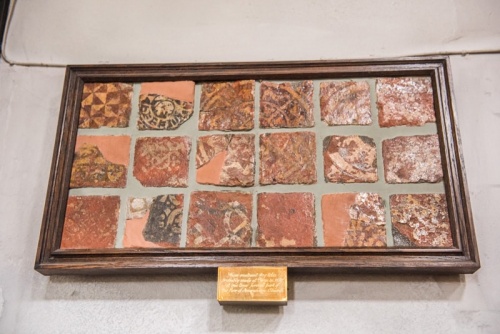 One of the most touching memorials is a small brass to John Drake, who died in 1623 at the age of 3. By comparison to the simple little brass, the tomb of Montague Garrard Drake (d 1728) is ornate, opulent, and lavish in the extreme. The memorial was sculpted by Peter Scheemakers and cost an estimated 500 guineas.

Opposite is an equally lavish monument to Drake's daughter-in-law Elizabeth (d 1757). This is thought to have been sculpted by Sir Henry Cheere, one of Scheemakers' students. Elizabeth's memorial outshines that of her husband William Drake, who built Shardeloes House.

Another very touching memorial is to Rev’d Arthur Tyrwhitt-Drake, who in 1831 suffered an apoplectic fit and died just as his wedding ceremony was concluding.

The oldest wall monument in the Drake Chapel is a black marble slab to Mrs Joan Drake, who died in 1625. 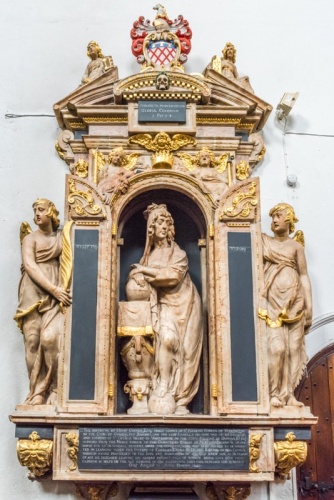 Near the high altar is an outstanding monument to Sir William Drake (1606-1669), with a half-length marble statue of the baronet. The baronet's sculpture is flanked by inscriptions commemorating his grandparents and his mother Joan Drake.

Joan Drake is said to be the only one of 33 children to survive to adulthood and marry.

Over the Drake Chapel doorway is a marble tablet to 5 infant children of the 2nd Sir William Drake who died between 1671 and 1681.

The church boasts several medieval brasses. The oldest depicts a civilian, probably William Brudenell, Lord of the Manor of Raans and Coleshill in the late 14th century. In the floor of the north transept is a brass to William's son Henry Brudenell (d 1430) and his wife, Eleanor Preston. Eleanor wears a horned head-dress typical of the early 15th century.

In St Andrew's Chapel is a brass commemorating Thomas Carbonell (d 1439) and his wife Elizabeth (d 1438), and another to John de la Penne (d 1537), an ancestor of William Penn, founder of Pennsylvania. On the east wall of the south transept is a brass plaque to Richard Champneys, a draper of London, who died in 1439. 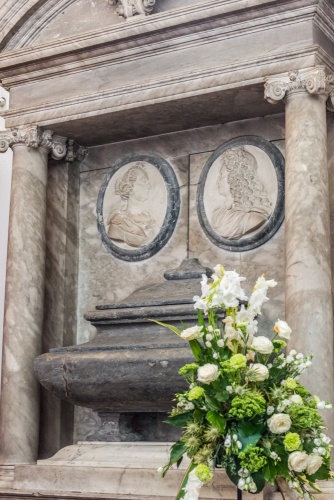 In the churchyard are about 40 unusual 'body stones', a style of gravestone with a rounded top only found here and in Kent. There are also a pair of cast iron gravestones. Also in the churchyard is an acacia tree planted in 1965 to mark the death of Sir Winston Churchill.

St Mary's is a delightful historic building, well worth visiting for its collection of 16th/19th-century monuments. There is no dedicated parking but there is a large town parking area a very short walk away on Broad Street, near Tescos. 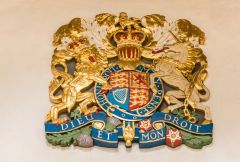 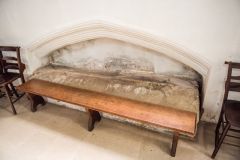