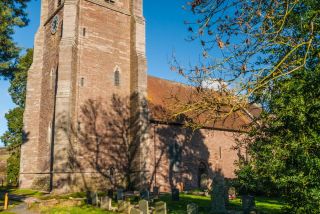 Peterchurch
Peterchurch lies in the heart of Herefordshire's Golden Valley, in the foothills of the Welsh Borders. The village is strung out along the B4348 which runs in a roughly north-south direction through the valley.

This is primarily an agricultural area, but in this region near the Welsh border, you are never too far from history. The landscape is studded with the remains of Norman mottes built to exert some measure of control over the turbulent region.

The name of the village is said to come from a much more peaceable historic relic, however. According to legend, St Peter passed through Peterchurch on his way to Rome and blessed a local spring so that baptisms could be held there. The spring still bubbles up at Peter's Well, where mossy stone steps descend into the wellhead.

The spire of St Peter's church can be seen from miles away, rising above the valley floor like a beacon to travellers. Though the church was founded in Saxon times (allegedly by King Offa of Mercia), the striking spire is a most unusual modern replacement. It is one of only two known English spires to be made of fibreglass, though you would have to have very sharp eyes to spot the difference.

Inside the church - which was heavily restored in the Victorian period - is a beautiful Norman tub font. Remnants of Saxon stonework can be seen in the sanctuary and the altar table is a thick medieval stone slab.

The other item worth noticing in the church is a painted image high on the south wall, of a fish with a golden ring hanging from a chain around its neck. This symbolizes an ancient legend that says that a fish was once caught in the River Dore and found to have a golden ring in its gills. Similar legends have been told about other places in Europe, notably at Pickering in Yorkshire and Orval in Belgium.

North of Peterchurch off the road to Bredwardine is a prehistoric burial chamber known as Arthur's Seat, while in the other direction, at the southern end of the Golden Valley, is Abbey Dore, where a medieval monastery lives on as the parish church.

This is excellent walking country, and the Herefordshire Way runs right beside the village to the west.

More self catering near Peterchurch >>

More bed and breakfasts near Peterchurch >> 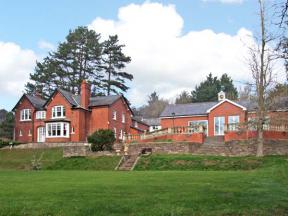 This detached country house is set in 6 acres of grounds in the hamlet of Vowchurch near to Peterchurch in Herefordshire and can sleep twenty four people in nine bedrooms.
Sleeps 24 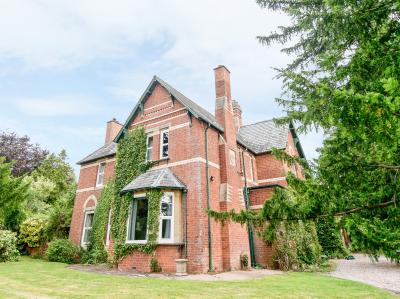 This lovely detached former vicarage close to the village of Peterchurch near to Hay-on-Wye and can sleep twelve people in six bedrooms.
Sleeps 12