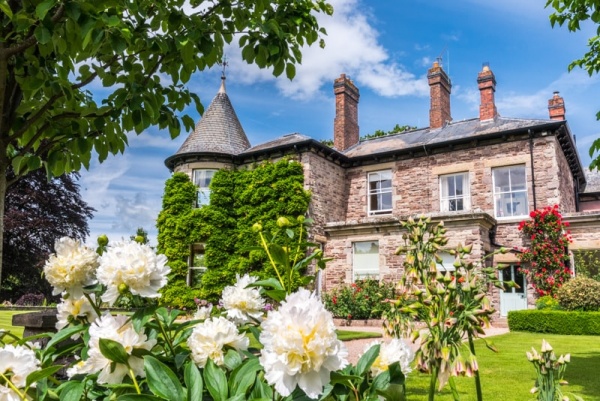 Brobury House was built in 1881 in a beautiful secluded location beside Bredwardine Bridge - the first brick-built bridge across the peaceful River Wye. Part of the site was once used as a kitchen garden for Bredwardine Vicarage, across the river.

Eight acres of gardens surround the late Victorian house, including a formal terraced garden and a more informal woodland garden. The predominant planting themes revolve around water and trees.

The garden is based around mature trees planted in the 1880s, though more recent garden owners have added their own touches such as the paper birch trees which add a striking touch of white to the green surroundings. Among the mature trees from the original planting are oaks, Victorian cedars and pines.

The Victorian terraces have been altered with the addition of three water features, enhancing the natural stream running through the garden to join the River Wye. 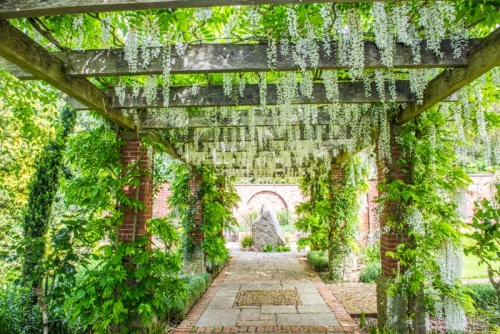 At the top of the garden, linked to a specimen tree walk, is a bog garden planted with Norfolk reeds, and at the bottom is a waterfall. The other major water feature is a pool and parterre in the style of Sir Edward Lutyens.

A trail leads beside the stream through pleasant woodland to a 2-acre water meadow.

The gardens are lush with colourful bulbs in spring, including tulips, narcissi, crocuses and snowdrops. The flower borders are at their best later in the year.

Near the house is a pergola, draped with wisteria in season, and the restored vegetable garden. 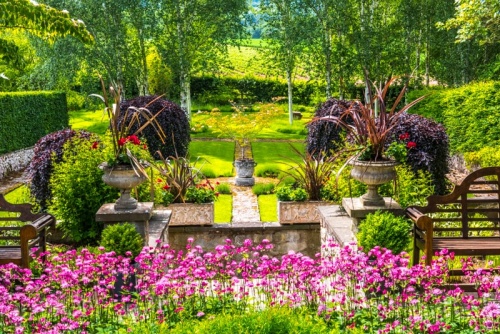 Prior to 1881 there were no buildings on this site beside the river. The estate was purchased by a Mr Houghton of Manchester, who built the elegant late Victorian house with its striking turret at one corner, and laid out the surrounding gardens on several levels. The Houghton coat of arms can be seen over the door.

Until Mr Houghton arrived this land beside the east bank of the river served as the kitchen garden for the vicarage. From the garden terrace, you can look west over the river and catch glimpses of the vicarage where Rev Francis Kilvert, the popular 19th-century diarist, served as the incumbent of Bredwardine Church, and where he lies buried. Rev Kilvert is said to have planted the mulberry tree at the end of the terrace on the top lawn.

Some of the original late Victorian garden features have survived, including the greenhouses, though they were once much larger. The late 19th-century pineapple pit survives. It could be filled with manure to create a warm, moist environment for growing exotic tropical fruit. 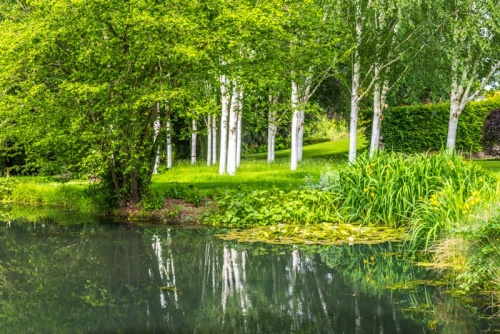 The Victorian gardens were altered in the 1930s by General Pitman, who laid out the orchard to depict his regiment on parade. Another major change came in the 1960s when the sloping lawn below the house was planted with over 3,000 rose bushes.

Brobury House Gardens are a delight to explore. Though not large, there is so much variety that you will constantly find yourself surprised as you wander. We particularly enjoyed the water features and the way the formal gardens blend into the more informal arrangements. The riverside setting is sublime. 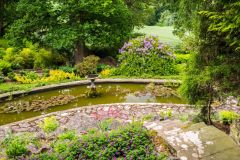 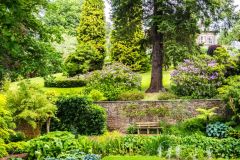 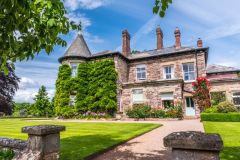 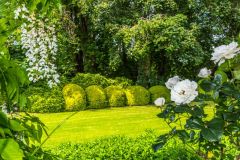 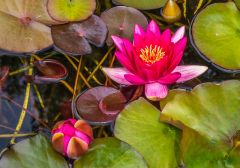 The Agent's House Bed And Breakfast - 4.6 miles
Hereford, Herefordshire
From: £70.00