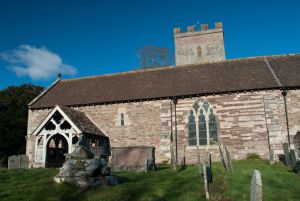 An intriguing country church in a beautiful setting above the River Wye. The oldest parts of the church date to the late Saxon period. The chancel was rebuilt in the early 15th century following a raid by Owain Glyndwr and his Welsh followers.

The most interesting feature of the church interior is two medieval memorials. The first, located to the left of the altar, is that of a man clad in late 14th-century armour. This is thought to be Walter Baskerville (d. 1369), whose family owned the manor of Bredwardine at that time. The effigy is cut off at the knees, but if we can deduce Sir Walter's height by the size of the remainder, he must have quite literally been a 'giant among men'. See a photo of the effigy.

The second tomb, to the right of the altar, is to Sir Ralph Baskerville, who died at the Battle of Agincourt in 1415 while defending King Henry V. This alabaster effigy is in much better condition than the Baskerville effigy opposite.

At the west end of the nave is a huge font, carved from a single block of local breccia or cornstone. The bowl probably dates from the 12th century and is mounted on a base of five slender columns (at least they appear slender compared to the sheer bulk of the bowl!). The font shows what seem to be the marks of a bolt and lock which must have been installed following an edict by the pope in 1301.

The lower section of the north wall, immediately opposite the south door, is of herringbone masonry, traditionally used in the late Saxon and early Norman periods. The south doorway has a much worn Romanesque tympanum, and very nicely carved capitals.

In the churchyard - just to the north of the tower - is the grave of Francis Kilvert, a Victorian vicar and diarist whose writings illuminated the life of poor workers in the Victorian period. Near the path to the south door is a stone bench erected by the Kilvert Society. Also in the churchyard, but this time to the south, is the base of a medieval preaching cross.

However, the most interesting historical feature of the church is to be found over the exterior of the blocked north doorway, called by Kilvert the 'Devil's door'.

Here you will find a rectangular lintel of red sandstone, carved with a pair of rosettes within double circle patterns flanking two central figures. The figure to the left is a strange bird/serpent of some kind, shown in profile, while the other is a grotesque animal that resembles a monkey.

The monkey's face and body have been damaged at some point in the past, leading some writers to suggest that it was meant to represent a 'Sheela-na-gig', or pagan symbol of fertility, which was defaced in a Christian attempt to eradicate pagan ideas.

Equally plausible is the idea that it is an 'exhibitionist', a full-frontal figure displaying its genitals, which might account for it being defaced by later generations who might find such images disturbing.

It can be rather confusing - and not a little humorous - to read historian's attempts to interpret the carvings. Victorian author Rev. Greville Chester saw the central figures as Bes and a Cynocephalus ape, a pair of ancient Egyptian religious symbols. Writer G Marshall saw them as a very Christian basilisk and Christ in Majesty, while modern writer E. Gethyn-Jones sees them as representing St Benedict and the Virgin and Child.

The carving, though worn with exposure to the elements, is still beautiful, and easy to discern. It is thought that the lintel was the work of the 'Bredwardine Masons', 12th-century craftsmen who were also responsible for carving at Willersley and Letton churches nearby.

Footpaths from the churchyard lead to the River Wye in one direction, and in the other, to the ruins of Bredwardine Castle, a Norman motte.

The Agent's House Bed And Breakfast - 4.5 miles
Hereford, Herefordshire
From: £70.00