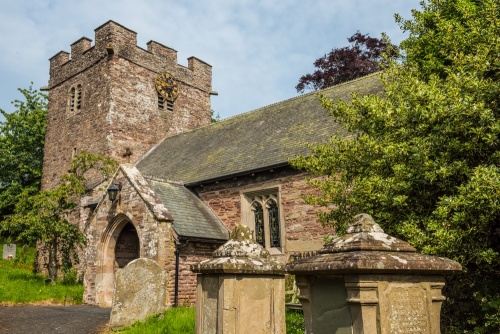 St Faith's Church in the Herefordshire village of Bacton stands in an elevated position looking down on the River Dore and the Golden Valley, one of the most remote and most beautiful areas of the Welsh Marches.

The oldest parts of the church date to the 13th century, but the site almost certainly goes back long before that. The original dedication was to St Foi (otherwise known as Moi or Tyfoi) a 6th-century follower of St Dubricius.

In the churchyard is a yew tree thought to be over 1350 years old, suggesting that this was a sacred site long before the present church was built.

In the chancel is a holy water stoup dating to the late 11th or early 13th century. The tower arch is from the same period and probably served as the original entrance.

The main roof timbers are 15th century but you can see carved figures of angels that may be earlier. The choir stalls also date to the late 15th century and are carved with the Parry coat of arms, 'argent a fess between three lozenges azure'. 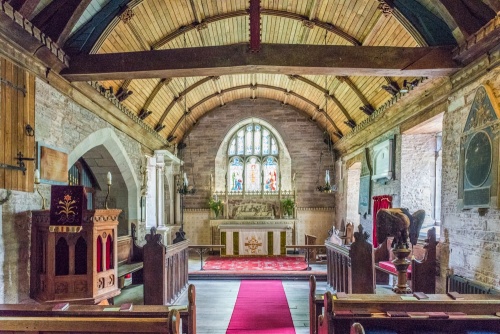 On the north side of the sanctuary is a superb 16th-century memorial to Blanche Parry, the Chief Gentlewoman of Queen Elizabeth’s Privy Chamber. Parry was the Queen's close friend and confidante and served as the official Keeper of the Queen's Jewels.

The tomb was created while Blanche was still alive; she expressed a wish to be buried at Bacton, where she was born, so the tomb was built, but when she died she was interred at St Margaret's Church in Westminster.

The Bacton tomb is thus empty, but that does not diminish its historical importance, for the Parry monument is the first known depiction of Elizabeth I as 'Gloriana', an iconic representation of the Queen as a British symbol. 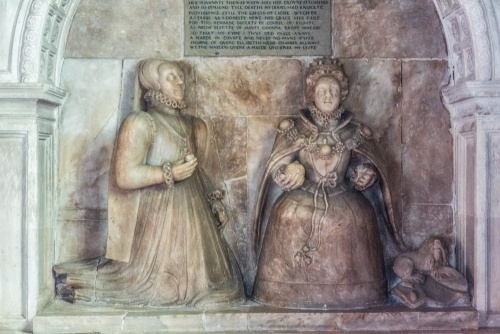 The name was created by the poet Edmund Spenser for the character representing Elizabeth I in his allegorical poem 'The Faerie Queene', published in 1590. Elizabeth liked the poem, which painted her in a flattering light and granted Spenser a pension of £50 per year in gratitude.

The memorial shows the figures of Blanche Parry and Elizabeth I side by side under a rounded arch. Blanche is shown kneeling, while to her left stands the queen playing the role of St Faith, holding an orb of office. The symbolic representation of Elizabeth I as Gloriana became very common at the end of her life, but this is the first known example.

The epitaph makes for fascinating reading. It ends with these lines:

The final line has been taken as 'proof' that Elizabeth I was indeed a virgin (a maid) since Blanche Parry would not have dared make the comment on a church memorial unless it was true, for fear of harming her chances of entering heaven. 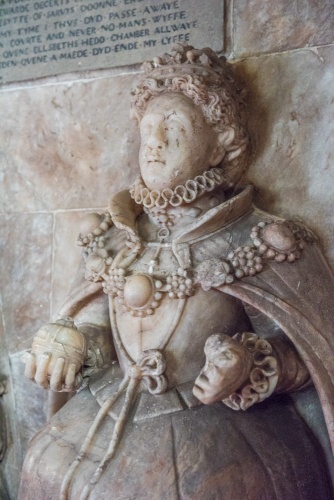 Elizabeth I as Gloriana

Blanche Parry's strong connection to Elizabeth I had another consequence. Around 1590 Elizabeth gave Blanche an altar cloth made from one of her court dresses. The cloth features intricately embroidered floral patterns and depicts daffodils, roses, honeysuckle, oak-leaves, acorns, mistletoe, columbine and vine.

Worked into the pattern are a wide variety of small animals including dogs, squirrels, butterflies, stags, fish and frogs as well as miniature rowing boats.

For centuries the altar cloth was used in St Faith's Church in Bacton, but the original is now preserved in Hampton Court Palace. An exact replica hangs in a display case on the north wall.

The embroidered cloth is extremely similar to the skirt Elizabeth wore for the famous Rainbow Portrait, now hanging at Hatfield House in Hertfordshire. The cloth is valued for insurance purposes at over £1 million and is likely the only piece of Elizabethan dress in existence today.

Blanche Parry's brother Symond Parry left money in his will (dated 1573) to add a steeple to the tower, 'so that the parishioners within 3 years of my decease do get a cunning and good workman to build the same'. 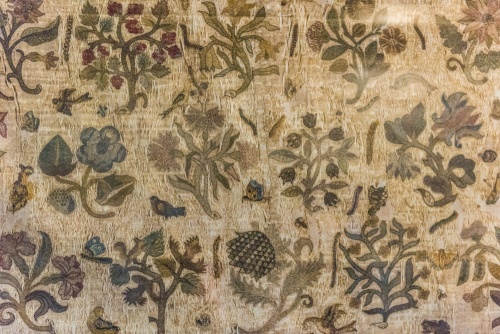 The Elizabeth I Altar Cloth

There are other historical monuments aside from Blanche Parry's. One is a 1620 memorial to Alexander Stantar. It shows him holding a skull while his widow Rachel holds a book. Rachel was the daughter of Sir Arthur Hopton of Ewyas Harold. She died in 1683 and an inscription in her honour was added to the tomb by her second husband Lewis Thomas.

There are some very good examples of late Victorian and early 20th-century stained glass. Two windows commemorate members of the Bellers family, owners of Bacton Manor.

Another two windows commemorate Reginald Gardiner Partridge, who died at age 20 in South Africa in 1900. All four windows in the north wall commemorate members of the Partridge family of The Green, Bacton. The family operated the stables where Sprig, the winner of the 1927 Grand National steeplechase, was bred.

St Faith's Church is a delight to explore and a treasure-trove of historical interest. The church was open when we visited. 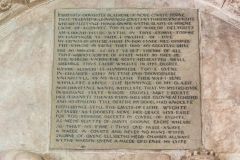 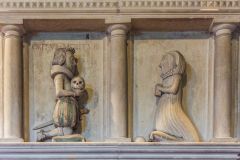