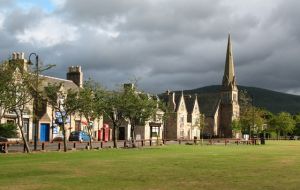 Aboyne
The Aberdeenshire village of Aboyne is perhaps best known as the home of an annual Highland Games. The Aboyne Highland Games Day traditionally takes place on the first or second Wednesday in September and is always held on the day before the famous Highland Gathering at Braemar.

The games in their current form date to 1867, but it seems likely that the Victorian event was merely a revival of a much older tradition that ceased after the suppression of clan customs following the 1745 Jacobite rising.

One interesting feature of the Aboyne Games is that by tradition, female dancers are not dressed in what we now think of as typical female dance attire, which is really no more than male Highland garb prettied up, but rather, the Aboyne girl dancers typically dress in the much more feminine Aboyne Dress based on 18th-century peasant clothing.

Much of modern Aboyne dates to the 1880s and is the work of Sir Cunliffe Brooks of Glentaur. The Victorian village replaces a burgh of barony built by Charles Gordon, the 1st Earl of Aboyne. Gordon owned Aboyne Castle, a stone fortress dating back to at least the 13th century.

The core of the castle is a motte and bailey. This was rebuilt several times and eventually replaced by an 18th-century mansion. The prize of Aboyne Castle is the Formaston Stone, a beautifully carved Celtic cross with Ogham script, dating to between the 8th and 10th centuries.

More self catering near Aboyne >>

More bed and breakfasts near Aboyne >> 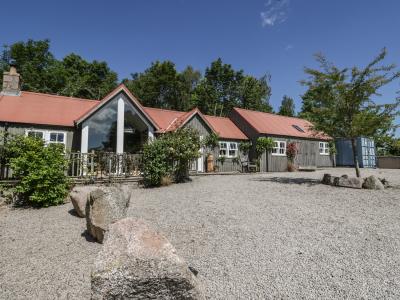 This delightful cottage rests in the village of Finzean, near Aboyne, in Scotland and can sleep four people in two bedrooms.
Sleeps 4