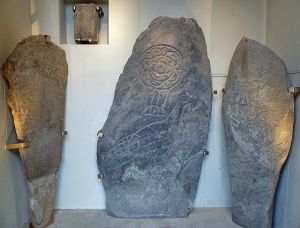 Inveravon Symbol Stones
The parish church of the little hamlet of Inveravon holds an archaeological gem. Embedded in the south wall of the church is a Pictish symbol stone of blue slate.

The Inveravon stone measures approximately 4.5 feet by 3 feet and dates from sometime between the 6th and 8th centuries. There are three carved symbols on the stone. The largest of these is an eagle. To the right of the eagle is a mirror and comb, while above these symbols is a beautifully decorated mirror case.

The Inveravon stone is what is called a Class I stone, meaning that is was not dressed before it was carved. There are three other stones also embedded in the church wall; one bears symbols of a crescent, V-rod, and beast, another has a partial beast head, and the third has a crescent, V-rod, triple disc, mirror, and comb. A similar set of four stones can be found in the church at Rhynie.

When we visited Historic Scotland was actively renovating the visitor facilities, adding a paved area and visitor parking, so hopefully, it will be easier in future for visitors to appreciate the Inveravon stones.

As a point of interest, the useful leaflet 'Moray's Pictish Trail', published out by the Moray Council and available at all local tourism outlets, spells the name of the church as 'Inveravon'. However, the actual road signs spell it 'Inveraven', so that you might wonder if you've reached the right place. You have, its the same place. I don't know which is right, but I'm going for the council spelling.

Inveravon stands on the banks of the River Spey, and a short walk to the south-west is historic Ballindalloch Castle, the traditional home of the Grant family.

Following Historic Scotland restoration work, the three Inveravon symbol stones have been moved into a special display area inside the church.