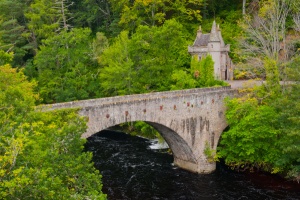 In fact, you can get a good view of the old bridge from the pedestrian walkway on the new bridge. Alternatively, take the access road on the northern end of the new bridge and park at the bottom, where you will find the attractive Scottish baronial gatehouse for Ballindalloch Castle.

The single-span bridge was designed by architect George Burn and is built of rubble resting on stone abutments at each bank. The bridge is now braced by iron ties for safety, but these ties are not original to the bridge design.

Two plaques can be found on the southern end of the bridge. The lowest one marks the highest point reached by flood waters in 1829 when the river level rose an extraordinary 7 metres (roughly 22 feet). The upper plaque commemorates General Grant of Ballindalloch, who commissioned the bridge.

The Old Bridge of Avon is located almost opposite the Ballindalloch post office and petrol station, and just south of historic Ballindalloch Castle. A few miles away is Drumin Castle, once owned by the notorious Alexander Stewart, the Wolf of Badenoch.

I found the Old Bridge quite attractive; the single span is very graceful and seems to float over the river below. The really attractive feature is the setting, however, with lush trees on either bank and the fairy-tale gatehouse of Ballindalloch Castle at the far end of the bridge. 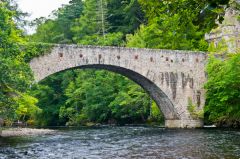 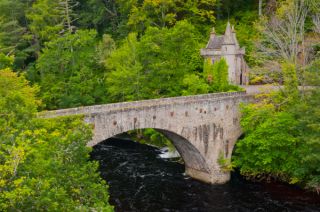 More self catering near Old Bridge of Avon

More bed and breakfasts near Old Bridge of Avon