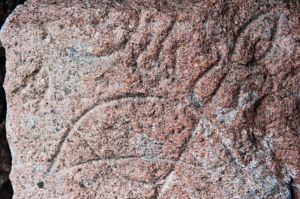 Three Pictish symbol stones stand in the old kirk graveyard car park at Rhynie. The smallest of the three stones has a carving of a beast and a comb. A larger, rectangular stone shows a crescent and V-rod, mirror, and a double disc and Z-rod symbol.

The largest of the three stones is carved with the outline of a beast head, a mirror and comb, and a Z-rod and double disc. The stones are signposted from the centre of Rhynie, and there is an information panel to explain more about the designs.

A fourth stone, known as the Rhynie Man, was discovered in 1978. It has an incised carving depicting a solitary man dressed as a farm worker and dates to between 700 and 850. The Rhynie Man stone now stands in the Grampian Regional Council offices at Woodhill House in Aberdeen.

In theory, there are two other Pictish stones in the Rhynie village square, one showing a double disc, the other a figure of a man. I looked around the square for ages and did not see them. If anyone local knows what's become of them, let me know!

The area around Rhynie has turned up numerous examples of carved Pictish stones. One of these, a solitary stone called the Craw Stane, is on private land just past the churchyard and is not normally available for viewing without prior permission from the landowner. Seven miles away is the Picardy Symbol Stone, while in the garden of historic Leith Hall is a collection of carved stones found nearby. 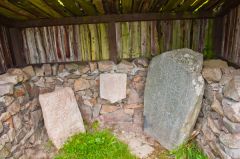