HERITAGE HIGHLIGHTS:   One of the earliest Christian sites in north east Scotland 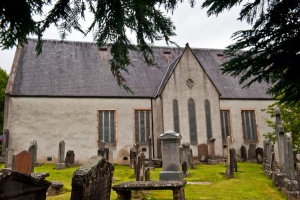 Mortlach Kirk stands in Kirktown of Mortlach, on the southern edge of Dufftown, off the B9009. The current building appears to be a product of the 19th century, but that is deceptive, for the origins of Mortlach church go back to the 7th century, making it one of the earliest Christian sites in north-east Scotland.

In the church vestibule is a carved Pictish stone bearing the image of a beast. One of the stained glass windows depicts Pictish stones as well.

Sometime in the late 6th century St Moluag arrived in Mortlach and established a religious community. The earliest parts of the church may date to the 8th century, or possibly even earlier, but much of what we can see today dates to a major rebuilding in the 12th century when another religious community was established. The church was rebuilt again in the 18th and 19th centuries.

The Battle of Mortlach

When Malcolm II defeated a force of Danes led by Sweyn in a battle at Mortlach in 1010 he had the church enlarged by three spear lengths in celebration. The traditional site of the battle is on the haugh, or meadow, below the churchyard, though the official mapping from the Royal Commission on the Ancient and Historical Monuments of Scotland (RCAHMS) puts it almost immediately opposite the kirk, up the hill.

The first Bishops of Aberdeen?

According to another tradition a bishopric was established at Mortlach in 1011. It could be a coincidence, but this was immediately after Malcolm II's victory over the Danes here. Perhaps it was a way of giving thanks for victory? An alternative version of events suggests that the see was established in 1063.

In either case, the bishop's seat was transferred to Aberdeen in 1215, so you could say that Mortlach was the first seat of the Bishops of Aberdeen, though to be fair the scholarship behind this tradition is not conclusive. Equally possible is that there was a monastic bishopric at Mortlach; a Celtic centre from which priests went out to engage the local population.

In the north wall of the church is a leper's squint, made so lepers could observe the high altar during services without coming into contact with other worshippers. Within the churchyard is an early 19th-century watch house, built so that watchmen could guard the burial ground against grave robbers. 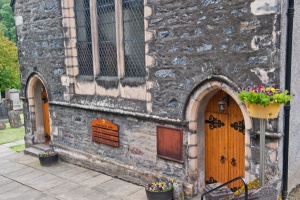 The kirk entrance
A few hundred yards uphill in the direction of Dufftown is the Priests Well, an ancient holy well also known as St Moluag's Well, though whether it has any actual association with the saint we cannot know for certain. It is now encased in a concrete tank, so not a particularly appealing historic site to visit! Much more appealing is the Battle Stone, in the lower graveyard below the church. This Class II stone has a mix of Pictish and Christian symbols.

Even if the church is closed (which it was when I visited), there is a further ancient stone in the churchyard. This is the Battle Stone, a large carved stone located in the lower graveyard below the church. Technically known as a Class 2 cross-slab, the Battle Stone is carved with a symbol of a cross decorated with spiral designs. Above are a pair of sea monsters, with another beast figure lurking beneath.

The reverse of the stone shows a huntsman with a hound, below a bull's head, a snake, and an eagle. Now, having described the carvings, in truth the stone is very hard to decipher; it is very worn, and covered with lichen. The cross is easy to make out, but the rest of the carvings can be difficult to see.

Despite the ancient history of this site it proved very difficult to find out about any opening times. In the end, I just showed up and hoped. The church was locked, and as far as I could tell, it stays locked except for services (unless someone who knows better can tell me different!). However there is a small parking area, and you can easily walk around the exterior of the kirk and visit the Battle Stone in the lower graveyard. 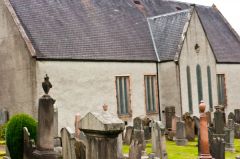 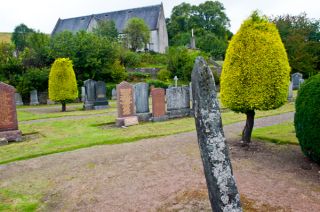 More self catering near Mortlach Kirk