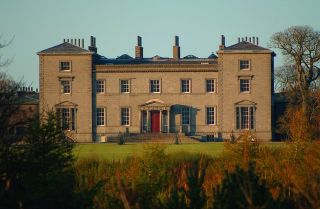 Cairness House
Cairness is a magnificent neo-classical house, designed by architect James Playfair for Charles Gordon of Cairness and Buthlaw. The house was built in 1790 to replace a smaller house built only 9 years previously. When Playfair died before the house could be finished the construction was completed by Sir John Soane.

Cairness House was the home of the Gordons until 1938. It later served as a farmhouse and flats. Since 2001 the house has been the subject of a major ongoing restoration project that aims to return it completely to its former glory.

The central 5 bays of the house are essentially the 1781 house, designed by Robert Burn. To this block, Playfair added flanking pavilions and a hemicycle to the rear of the property.

Several symbolic elements in Playfair's design suggest a connection with Freemasonry; to the front of the house are a pair of arches resembling Masonic 'Royal arches'. Further Masonic symbols appear on the front parapet and on either side of the front porch. The symbolism does not end there; the layout of the house resembles the letters CH, standing for Cairness House and Charles Gordon.

Even more intriguing is the Egyptian Room, possibly the first such room in the country, and possibly intended as a Masonic meeting chamber. The room is decorated with hieroglyphs which contain an encoded message.

In the centre of the courtyard is the unusual rounded Icehouse, built to a honeycomb pattern within. The icehouse was meant not only to fulfil the practical function of food storage but also to act as a symbolic temple, probably based on the Roman Temple of Vesta.

After an extensive and award-winning restoration of the Cairness House interiors, many of the furnishings were sold at auction. As far as we can determine the house is not open to the public at present, but if this situation changes we will update this page. In the meantime do not make plans to visit!

More self catering near Cairness House >>