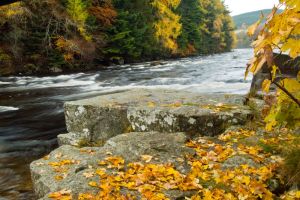 The River Dee at Crathie
A pretty little village on the north bank of the River Dee about midway between Ballater and Braemar. Crathie is best known as the gateway to Balmoral Castle, across the river to the south.

In the village itself is the little parish church which members of the royal have been known to attend when they stay at Balmoral. The church dates to 1895 and replaces a much older building which Queen Victoria regularly attended.

Within the church are memorials to members of the royal family, including George VI. In the kirkyard is a memorial built by Queen Victoria in memory of her faithful servant, John Brown.

The Queen's relationship with Brown was the subject of no little speculation and inspired the recent popular film, Mrs Brown. Brown's private house stands across the Dee from the church and can be viewed from his memorial.

The road across the river from Crathie to Balmoral passes over an iron bridge built by famous Victorian engineer Isambard Kingdom Brunel.

Aside from Balmoral Castle, there are several other historic attractions in the area, including Abergeldie Castle, just a mile or so east along the south bank of the river (B976). Or, if you head west, you'll soon come to Braemar Castle, which is right on the main A93. In Braemar itself is the ruined 11th-century royal fortress of Kindrochit Castle.

More self catering near Crathie >>

More bed and breakfasts near Crathie >>