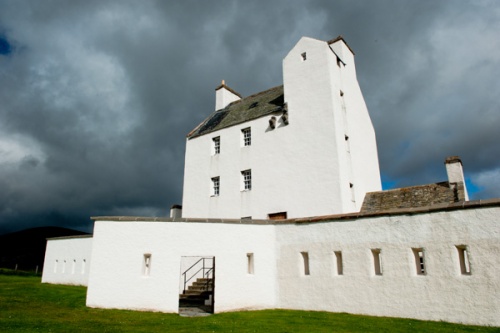 Enigmatic Corgarff Castle stands amid a landscape that is by turns stunningly beautiful or incredibly bleak and barren. On a grey winters day it seems the most desolate place on earth, and perhaps to suit that mood it has a dark and deadly history.

Corgarff has passed through two phases in its long and troubled history. The first phase saw it used as a fortified residence, like many other castles in the region. The second phase saw it transformed into a military barracks, a role it frankly feels much better suited for.

The first castle at Corgarff was a fortified tower house, possibly built about 1550 by the Forbes clan, or by the son of Lord Elphinstone of Kildrummy. The original house was fairly small - only 12 metres by 8 metres - with a storage area in the vaulted basement, a hall above, and private chambers above that.

Access was by way of an external stair to the first floor. Clustered around the base of the tower were secondary buildings necessary to life in a castle, such as a bakehouse, brewery, and stables, and a well. 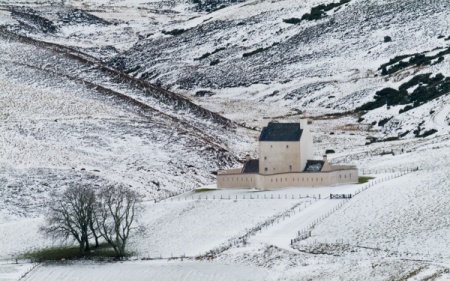 Around 1550 the estate at Corgarff passed from the Elphinstones to John Forbes of Towie. The Forbes clan had a long and bloody feud with Clan Gordon, and in 1571 that feud came to a head in the darkest hour of Corgarff's history.

In November of 1571, Adam Gordon of Auchindoun marched to Corgarff with a band of his men. Some versions of the story suggest that Gordon was intent on capturing Forbes of Towie, but the laird and most of his menfolk were away. Other versions say that Gordon knew full well that Forbes was absent, and timed his raid to take advantage of that fact.

In any event, when Gordon arrived, Corgarff was defended by the laird's pregnant wife, Margaret Forbes. She refused to allow the armed men to enter her home and to scare off the Gordons she fired a pistol at the knee of one of his men.

Gordon went into a rage (or simply executed his plan, depending how much ill-intent you wish to assign him). He had his men set lighted branches to the garderobe chutes, hoping to smoke the inhabitants out. Or, perhaps, he intended to burn the castle down from the start.

Whatever his intent, the castle was burned and all the women and children gathered there were killed. Most sources say that around 24 people died in the castle fire.

A further story says that the castle residents retreated to the top of the garret, where in a desperate bid to send for aid they wrapped a slender young woman in a blanket and threw her out the garret window. Another version says they tied sheets together and lowered her from the window.

Tragically, the woman landed on one of the Gordon men's bayonets and perished. The Gordon soldier, so moved by the girl's beauty, composed a lament which became the traditional ballad called Edom O' Gordon.

The ghost of the girl is said to haunt the castle, and according to the guide I spoke to, occasional visitors have reported experiencing something strange as they wander about the upper floors of the tower. Whether it was the power of suggestion or not, I felt the hairs on my neck stand on end as I climbed to the garret. Perhaps it was the cold wind.

Corgarff was briefly seized by local outlaws in 1607, and in 1609 Highlanders raided the castle and stole the animals. In 1645 the Marquis of Montrose occupied Corgarff on behalf of Charles I, and in 1689 it was burned by Jacobite supporters so that it could not be used by royalist troops supporting William and Mary.

Around this time Corgarff passed to the Earl of Mar, and in 1715 the Earl launched the Jacobite Rising from his seat at Kildrummy. Mar marched to Corgarff to recruit men for his ill-fated rising. But Corgarff had not seen the last of the Jacobites, for in 1746 Highlanders supporting Bonnie Prince Charlie occupied the castle.

Three hundred redcoats marched from Aberdeen, through terrible winter weather, to find the castle undefended, but so narrowly did they miss their enemies that the fire was still burning. 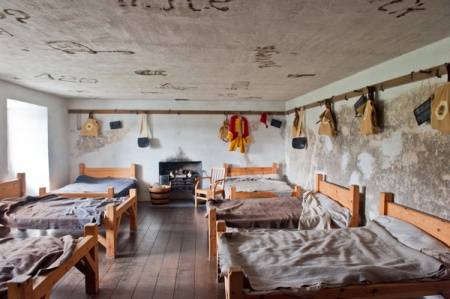 As part of the government efforts to pacify the Highlands, they built a series of army forts. From 1748 Corgarff was converted from a fortified tower house to a military barracks. The most obvious feature of that conversion is the distinctive star-shaped perimeter wall that surrounds the castle.

The peculiar shape was meant to provide lines of fire so that there could be no place an enemy could approach. The wall would never have withstood an artillery attack; it simply isn't strong enough, but it would have deterred a band of armed Highlanders from raiding the castle.

It is as an army barracks that Corgarff is presented to visitors today. The former hall on the second floor is presented with rows of beds for the soldiers. In fact, this about the only 'furnishings' you see in the entire castle!

Mostly what you see are the bones of the building, from the storage cellars to the garret at the top of the tower. Each room has information panels telling the history of the site, and there is a small shop on the first floor.

But in truth, you come to Corgarff for the incredible scenery and the history, not the interior furnishings. By far the best place to view the castle is from the layby part-way up the main road towards Tomintoul.

From there you can get superb views over the bleak and harshly beautiful landscape, and wonder what life must have been like for the people who lived here long ago. Corgarff is an unforgettable place, one of the most striking and ultimately moving castles in Britain. 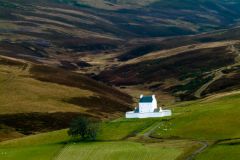 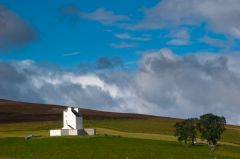 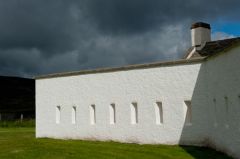 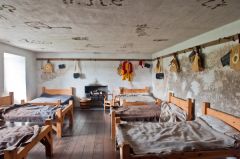 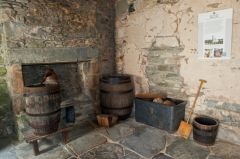 More self catering near Corgarff Castle