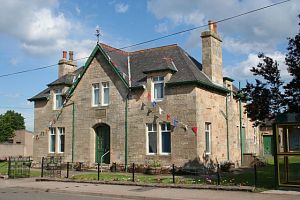 Dallas community hall
A small village in the valley of the River Lossie in Moray. In the churchyard stands an old market cross, over 12 feet high, probably dating to the 16th century. St Michael's Cross is traditionally said to mark the exact centre of the county of Moray. The church itself is late 18th century, built to replace a medieval building.

The prosperity of Dallas has long depended on slate mining. Slate from Dallas was used in a number of prominent public buildings, including the Tolbooth at Elgin.

The village is fairly recent; it was laid out in the Victorian period. The manor is Dallas Lodge, built in 1688 for Sir Robert Gordon, who intended to create a fully circular building, but the circle was never finished, and the house remains a semi-circle.

More self catering near Dallas >>

More bed and breakfasts near Dallas >>