HERITAGE HIGHLIGHTS:   A superb example of an early medieval castle and town walls 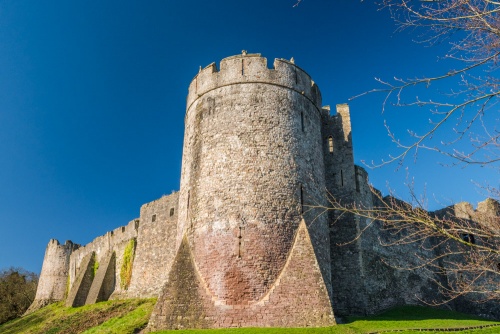 Chepstow is one of the earliest stone castles in Britain, and its design heavily influenced later castles. The fortress served as the administrative heart of the Marcher lordship of Chepstow, one of the most important of the English-dominated territories along the Welsh border.

Chepstow is the first real 'castle' in Wales in two senses; it is the earliest stone fortress of the type we think of as a castle, and the first you come to when entering southern Wales, being located immediately inside the Welsh border, on the west bank of the River Wye where it empties into the Severn.

The first castle at Chepstow was erected in 1067 by William fitz Osbern, a Norman follower of William the Conqueror. Fitz Osbern fought beside William at the Battle of Hastings and was rewarded with the earldom of Hereford as well as extensive lands in south Wales.

Fitz Osbern wanted a castle to control the main river crossing over the Wye, on the main route into Wales. He chose a narrow promontory overlooking the river for his fortress, and the geography of the site influenced the design of the castle over the next few centuries.

The constricted site meant that Chepstow developed into a very long, narrow castle, with one ward leading to another along a vertical axis. Most Norman castles erected soon after the Conquest were simple wooden affairs, often constructed atop a small motte, with wooden structures atop the motte for defence and domestic use.

Chepstow was different; it was built in stone right from the start, using stone from Caerwent Roman town to create a tower enclosed by wooden baileys. 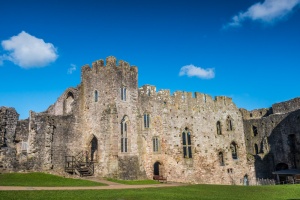 The Earl's Chamber
from the Lower Ward

Fizt Osbern did not have long to enjoy his creation; he died in 1071. His son, also named William, plotted against the crown and Chepstow became a royal estate. In 1189 Chepstow passed to William Marshall, one of the great knights of the medieval period and later Earl of Pembroke.

It is to Marshall that we owe much of the castle we see today; he extended and strengthened the Norman castle and enclosed it within strong stone walls punctuated with towers, in a design reminiscent of castles in the Holy Land, where he had been on Crusade.

He added the Marshall's Tower, with apartments for himself and his wife, the heiress Isabel de Clare, whose sizeable fortune helped pay for the work. After Marshall's death his five sons inherited in turn, but each died without an heir.

When the Marshall line died out the castle passed to the Earl of Norfolk, Roger Bigod II, who further strengthened the defences and created comfortable domestic apartments, turning the military fortress into a lavish mansion. He also added a strong stone wall to enclose the town.

Only fragments of the town walls remain, including the gateway known as Town Gate. Further enhancements to the living areas were added in the early Tudor period by Charles Somerset.

Chepstow saw action in the Civil War. It was held for the king in 1645 and again in 1648, but each time it was captured by Parliament. After the Restoration of the Monarchy in 1660, the castle was used as a prison and military garrison.

The most famous prisoner was Henry Martyn, one of the Parliamentary leaders who had signed Charles I's death warrant. Martyn was held for over 20 years in the tower to the left of the main entrance, a tower which now bears his name.

The castle was then left to decay for over 200 years, becoming a derelict ruin, though one often visited by artists, who thought it a suitably picturesque subject for romantic paintings. Today it is in the care of Cadw, Welsh Heritage.

Almost immediately beside the castle site is Chepstow Museum, housed in an elegant late 18th-century house, and a short walk away is Chepstow Priory, a wonderful early medieval church. 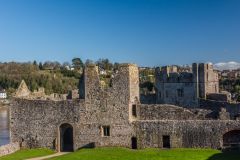 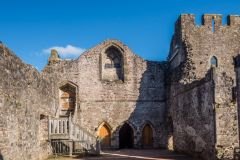 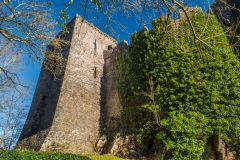 More self catering near Chepstow Castle >>