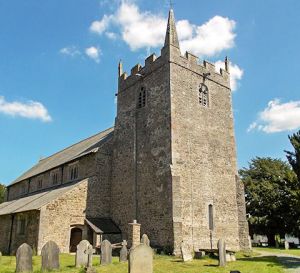 Guilsfield, St Aelhaiarn's Church
St Aelhaiarn's is a very well-preserved 14th century church with an earlier tower, on the site of a pre-Norman church perhaps founded by the saint himself. There is an exceptional 14th century nave roof and a painted Tudor ceiling in the chancel.

The round shape of the churchyard, and the association with the 6th century saint suggests that there was a very early pre-Norman church here. A stone church existed in the 12th century but the present building is mainly 14th century. In the 14th century the church was annexed to the mother church at Meifod, and dedicated to All Saints.

A sweeping restoration by GE Street in 1879 means that only some of the medieval features remain. Among the best is the striking 14th century roof. This very unusual roof spans 25 feet, without any timber supports.

The panelled roof in the chancel is Tudor, beautifully decorated with 240 panels and 312 painted bosses at the intersections. What is remarkable is that very few of the bosses are similar. It is estimated that 120 of them are completely unique in design from the others. Designs include trefoils, circles, and quatrefoils. There are fragments of the original medieval rood screen at the chancel entrance.

One remnant of the early medieval church is the west tower, probably of late 12th or early 13th century date. The tower was re-faced in stone during the 15th century when battlements and a spire were added.

In the churchyard, standing in the shade of an ancient yew tree, is a table tomb to Richard Jones, (d.1707). One side of the tomb shows a skull and cross-bones as symbols of mortality.

Aelhaiarn was a late 6th century member of one of the ruling families of Powys. He probably trained under St Beueno before returning home to mid Wales and helping establish Christianity here. It is entirely possible that he founded the first church at Guilsfield, but if not, he certainly inspired it.

Aelhaiarn translates into English as 'iron brow', and there's a rather vivid tale that explains the name . It seems that Bishop Beuno had a habit of taking a walk in the middle of the night to a place called Llaynhayrne, where he would kneel on a stone in the centre of the river and pray.

Aelhaiarn, then a student under Beuno, was curious to find out what his master did on his midnight excursion, so one night he followed in secret. while the saint knelt to pray in the river, Aelhaiarn accidentally made a sound in the bushes. Beuno looked around and saw the outline of a man in the shadows. Fearing an attack, he prayed that God punish the interloper if his intentions were not honourable. Well, God must have decided that Aelhaiarn was not honourable, so he sent wild beasts to rend him apart. Too late, Beuno realised who the stranger was.

To make amends the saint put Aelhaiarn back together, but in the dark he could not find one of his eyebrows. He decided to use the metal tip of his staff as a substitute, and Aelhaiarn was returned to life, yet with an eyebrow of iron.

As of this writing the church is open daily, though it closes earlier in winter.