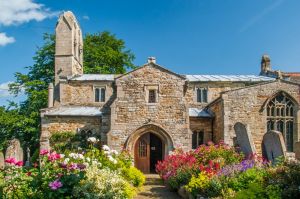 The parish church of St Mary's is an attractive, if unusual-looking 12th-century building. It has no tower for a start, which is a rarity in this area. The south porch with its parvise (little room above the entrance for use by the priest) is 14th century. The parvise, unusually, is not linked to the body of the church, giving the entrance an odd look.

There are two scratch dials outside the porch, for use as simple sundials in the days before church clocks. The west front is 13th century, and is topped by a double bellcote. There is a pair of bells, as well as a medieval sanctus bellcote - without its bell - over the east end of the nave.

The interior of the nave is late Norman, with a 14th-century clerestory added. There is a lovely old Norman bell-shaped font, and nearby is a poorbox with the date 1637 carved on it.

The chancel arch is 13th century, and above it is a richly restored royal coat of arms dating to around 1796. The entire chancel was rebuilt in that year, and as a result, has a decided Georgian air at odds with the rest of the building.

In 1356 the church housed a chantry college of three chaplains, and the founder of the college, Sir William Wade, is buried in the north transept. A brass plaque commemorating Wade is on the wall by the north pulpit. 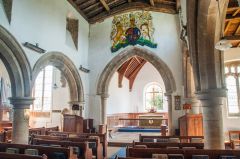 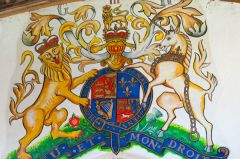 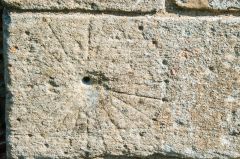