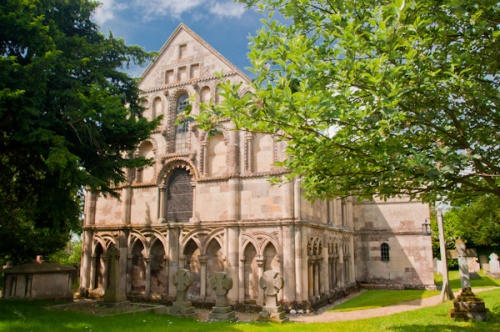 St Peter's church in the small Rutland village of Tickencote is a real hidden gem, an unexpected historic treasure. The name Tickencote comes from the Saxon words Ticcen and Cote, meaning a pen for goats in a forested area.

There was a Saxon church here before the Norman Conquest, and elements of that Saxon building are incorporated in the current building, which was probably begun in the early or mid 12th century, sometime before 1160.

The highlight of the Norman work - indeed, the highlight of the church as a whole - is the extraordinary chancel arch. There are not adequate words to describe the arch; it is quite simply an astounding piece of architecture. I am hard pressed to think of Norman work of similar quality in any small parish church in England.

The arch is composed of six orders on the nave side (3 on the chancel side) and is of astonishing detail. The outer order has square-cut foliage decoration, within billet moulding. The fifth order is chevron moulding; a traditional Norman motif. The fourth order has a series of grotesques alternating with geometric and foliage designs.

Most of these beasts are traditional themes; a muzzled bear, the head of a fox holding a monk's hood, cat's heads, and monsters. There are also a pair of Janus heads turned away from each other. These may represent Stephen and Maud, the two rival claimants for the throne around the time the arch was constructed.

The third order has zigzag and embattled mouldings. The second has beak head ornamentation, and the innermost arch has simple, plain mouldings.

The orders are supported on cylindrical columns, with intricately carved capitals. You might well wonder why an arch leading to the chancel should be so highly decorated. One theory is that this was originally the outer doorway arch to a single cell chapel and that the nave was only added to the building in the 13th century, thus enclosing the arch. 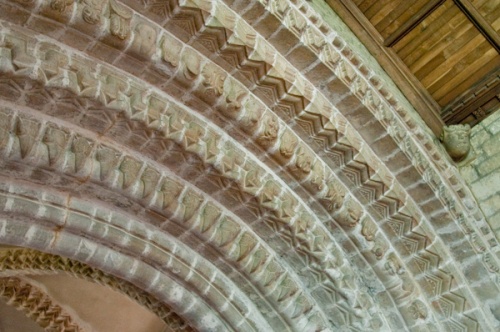 The chancel side of the arch melds into the most wonderful sexpartite Norman vaulting in the chancel itself. It is extremely rare to find this type of vaulting in the Norman period, indeed, this may be unique in Britain. At the centre of the vaulting is a large roof boss. It is very rare to find ornamented bosses in Norman architecture, and this may be among the earliest bosses in Britain.

Set into the south wall of the chancel is a tomb niche, where you will find an age-blackened wooden effigy of a knight in armour. This is thought to be Sir Roland le Daneys, who fought for Edward III in France. Le Daneys represented Rutland in Edward's Great Parliament of 1352. 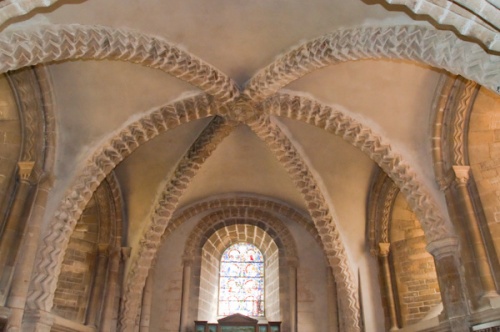 Back in the nave, set at the south foot of the arch, is the font, a wonderfully carved square design dating to the 13th century. Despite the fact that it likely dates to 60 or 70 years later than the chancel arch, the arcaded design complements the arch perfectly. The font bowl is part of a solid block with the base. The base was originally plain, but at some time over the past few centuries, it has been carved to simulate legs at the corners.

As for the nave itself, it contains little of the original Norman work; it was rebuilt in 1791 on the foundations of the old nave.

It seems odd to mention the exterior last, as it is the first part that visitors will see. But it is well worth mentioning, for it is extraordinarily richly detailed, with a plethora of Norman style blind arcading mixed with classical columns. The classical element is most easily appreciated on the south side, where the porch is supported by thick classical columns.

This is the result of extensive rebuilding in 1792, initiated by Eliza Wingfield, whose dedication is inscribed over the south porch entrance. The overall effect of the late Georgian work is best appreciated from the south elevation.

Quite why Tickencote church is not better known is a bit of a mystery to me. It is certainly every bit as interesting as more heavily publicised Norman churches. It truly is a hidden treasure and deserves a visit. 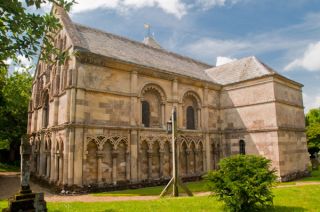