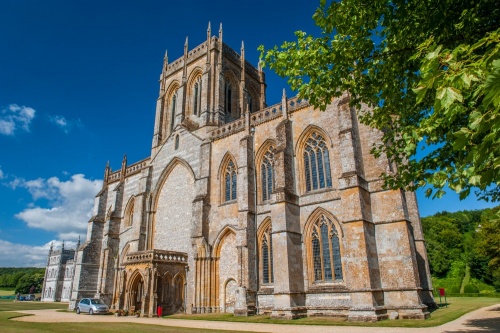 It is hard to imagine a more beautifully situated church than Milton Abbey. It is set in a bowl of wooded hills, seemingly miles from anywhere. The first church at Milton was founded in 933 by Athelstan, King of Wessex. Athelstan may have been prompted by guilt over the death of his brother Edwin, who was lost at sea.

In 964 King Edgar founded a Benedictine monastery at Milton, populated with monks from Glastonbury Abbey. In 1309 the abbey church was destroyed by fire, and the current building was begun. It took about 100 years for the church to reach its current size and shape. When the Abbey was suppressed in 1539 the estate was purchased by Sir John Tregonwell.

The Tregonwells stayed at Milton until the 18th century. In 1752 it was bought by Joseph Damer, later Lord Milton. Damer hired John Vardy, and later William Chambers, to create a Gothic mansion and rebuild the church. Chambers and his client quarrelled, and the project was turned over to James Wyatt, who finished the house and abbey remodelling.

Damer decided that the old village that had grown up around the abbey had to go, and over the course of several decades, he razed the old buildings and created a new, planned village about a half-mile to the southeast, well out of sight. This new village of Milton Abbas is then one of the earliest attempts at urban planning in England. As for Damer's grand house, it is now the centre of a well-respected school.

As for the abbey church, it is a curious structure, spacious and filled with light inside due to huge stained glass windows illuminating the west crossing. At one end of the Crossing is the striking white marble tomb erected by Damer in memory of his wife Caroline. 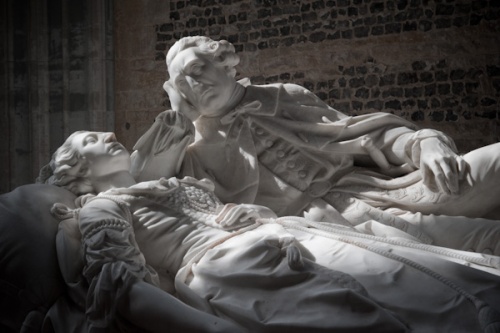 Perhaps the most impressive feature is the wonderful vaulting, decorated with carved bosses. In the Lady Chapel is a picture of John Tregonwell, who, aged six years, fell from the tower in 1605. His voluminous clothing acted as a parachute, and he was remarkably unhurt. There is also an early 16th-century rebus (a naming pun) to Abbot James Middleton.

One medieval treasure is the astonishing 15th-century reredos in the Presbytery. This highly embellished work is one of the finest in England, and the lower sections retain traces of original paint. There is a 14th-century sedilia, and a wooden Hanging Tabernacle, or pyx. This is nine feet tall and is thought to be unique in England. Nearby in the choir are two 15th-century oil paintings.

A short, but steep, walk uphill from the Abbey church brings you to St Catherine's Chapel, a small medieval church set on a terrace overlooking the Abbey. This is a plain 12th-century building built by the monks as a pilgrim's chapel. Footpaths lead over the wooded hills to the village of Milton Abbas. 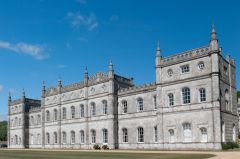 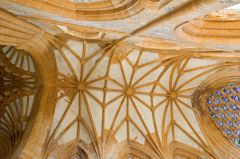 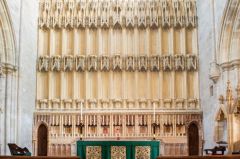 More self catering near Milton Abbey >> This converted fire station, turned thatched cottage is located in Milton Abbas, Dorset and can sleep two people in one bedroom.
Sleeps 2