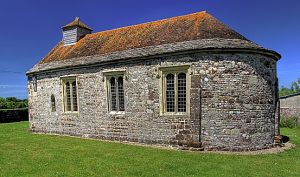 The entire structure consists of a nave, chancel, and apse, all joined into a single unit. St Andrew's is the only church in Dorset to retain its original Norman apse. If not for the rounded apse and the tiny west bell turret you could easily mistake the church for a barn. Indeed, that's exactly what it was used for when the church fell out of use in the late Victorian period.

At the west end is the wooden bell turret, housing a single bell, cast in 1668, possibly by Anthony Bartlet of the famous Whitechapel foundry.

The church roof is a simple 15th-century barrel-vaulted affair, which unusually curves around to include the rounded apse roof. Finely carved bosses decorate the intersection of the vaulting ribs. While the structure is pure Norman, the interior fittings are primarily Georgian. The interior is lit by three large 17th-century windows inserted in the south wall.

Here you will find a two-tiered pulpit standing above box pews, and a west gallery overlooking the nave, with a panelled front made from a late medieval rood screen. The oak screen, communion rails, and table were all created at the same time by local craftsmen as a gift from Archbishop William Wake (1637-1737), a native of Blandford Forum. Wake's family home was situated close by and the archbishop occasionally arrived unexpectedly to lead services.

The church was restored in 1931 by the Society for the Protection of Ancient Buildings (the restoration funded in part by the sale of Thomas Hardy manuscripts, which seems fitting as this is the heart of Hardy's Dorset, after all!). Hardy himself was known to enjoy the little church.

St Andrew's is no longer used for regular worship and is cared for by the Churches Conservation Trust.