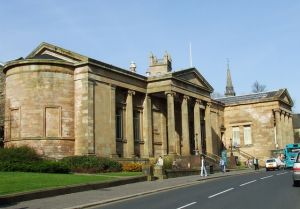 In 1491, three illuminated manuscripts were created for the parish church of Arbuthnott in Kincardineshire. The three manuscripts were a missal, a prayer book, and a psalter. The Missal is the only complete service book in Scotland to survive the Reformation undamaged.

The Missal is exquisitely detailed, with colourfully illustrated Biblical scenes and moral lessons. One of the most famous scenes shows in horrible detail a rite of excommunication. The Missal provides a fascinating glimpse into the medieval mind.

The museum holds a huge archive of historical documents covering the history of Renfrewshire. Find out about Paisley Abbey, the earliest inhabitants of the region, the shipbuilding and textile industries, and objects from everyday life in Renfrewshire. There are over 20,000 old photos of daily life, dating back to the 1850s.

Not only does the museum cover local history, but it holds a fascinating collection of archaeology, including objects from ancient Egypt, and a carving of the Babylonian god Nisroch thought to be over 3,000 years old.

The natural history collections showcase over 70,000 specimens, including fossils, minerals, and local plant and animal life. The natural history exhibits formed the core of the museum when it opened in 1871. One interesting feature is a biological records centre, which catalogues information on local species and natural habitats.

No visit to the museum would be complete without a look at the collection of textiles, including a nationally important collection of Paisley shawls. The colourfully patterned shawls were made on hand-looms throughout the 18th and 19th centuries.

See traditional weaving equipment in the Weaving Gallery. Watch a weaver at work and find out how these traditional textiles were created. One of the startling facts you'll discover is that Paisley shawls did not originate in Paisley, nor was Renfrewshire the only place in Europe where the colourful shawls were made!

Nearby accommodation is calculated 'as the crow flies' from Paisley Museum. 'Nearest' may involve a long drive up and down glens or, if you are near the coast, may include a ferry ride! Please check the property map to make sure the location is right for you.

More self catering near Paisley Museum >>