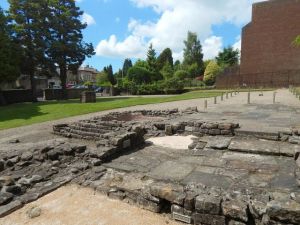 Bearsden Bath House
At Bearsden, you can see a 2nd-century bathhouse and an associated latrine built as part of a small fort on the Antonine Wall. Now almost submerged in the urban sprawl of Greater Glasgow, Bearsden Bath House is a reminder of a time when this area was on the furthest edge of the far-flung Roman Empire.

The fort itself has long ago disappeared under urban housing, but earlier excavations suggest that it was attached to the rear of the Antonine Wall, measured 112 metres x 100 metres and enclosed an area of 2.77 acres.

On the east side of the fort was an annexe, defended by multiple ditches. It is from the ruins of this annexe that the bathhouse and latrine have survived. The bathhouse was composed of seven rooms, including a changing room, a cold room, cold bath, two steam rooms, a hot steam room, a hot bath, and a hot dry room.

Together they form one of the best-preserved Roman structures on the Wall. Excavations at Bearsden uncovered a gaming board and the carved head of a goddess figurine. Another find was a stone inscribed by the soldiers of the 20th Legion, presumably the men who built the fort or were later garrisoned here.

Bearsden was one of 16 Roman forts along the course of the Antonine Wall.

Access is straightforward. The fort is located on Roman Road, close to the centre of Bearsden, in the north-western suburbs of Glasgow. It is signposted from Bearsden Cross on the A810.

Nearby accommodation is calculated 'as the crow flies' from Bearsden Bath House. 'Nearest' may involve a long drive up and down glens or, if you are near the coast, may include a ferry ride! Please check the property map to make sure the location is right for you.