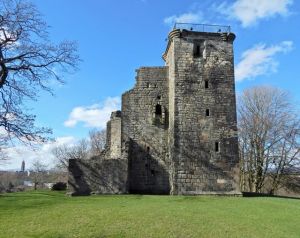 Crookston Castle
Crookston is an intriguing site; there may have been a circular Dark Ages enclosure here, possibly a fortified settlement, but this was superseded by a ringwork defence of earthen banks, built by Robert Croc around 1180. Croc, whose name is remembered in the current 'Crookston', built a private chapel within his earthworks, and foundations of the chapel have been unearthed.

Sometime around 1390 a new, massive tower house was constructed, making Crookston Castle the second oldest building in the Greater Glasgow area (after the Cathedral).

The new fortifications are quite unusual in Britain, with a three-storey high rectangular block augmented by a taller square tower at each corner. The castle layout is very continental in style, a rarity in the UK. Only one of these corner towers survives to near its full height.

Crookston was for many years owned by the Stuarts of Darnley. In 1489 the Darnleys were involved in a rebellion against James IV, and the king besieged Crookston, bombarding the castle walls with the aide of his massive cannon, Mons Meg.

The most famous - or infamous - member of the family was Henry Darnley (1545-67), the second husband of Mary, Queen of Scots. The queen may have stayed here with Darnley, indeed, there is even a suggestion that they became engaged to be married here at Crookston. 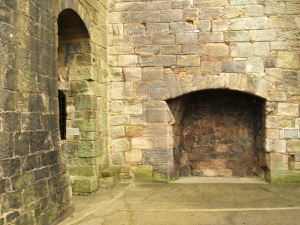 The castle lapsed into ruin and was eventually purchased by the Maxwells of Pollok. The Maxwells restored the castle in time for the 1847 visit of Queen Victoria to Glasgow.

Crookston Castle was the first property to be owned by the National Trust for Scotland, which was granted the site in 1931 by Sir John Maxwell, one of the founding members of the Trust. It is now in the hands of Historic Scotland. The castle is almost surrounding by modern housing, but the setting in parkland makes it easy to appreciate the remains.

Crookston makes several literary appearances, notably in works by Robert Burns and poet Robert Tannahill. Sir Walter Scott suggested that in 1568 Mary, Queen of Scots may have watched the fateful Battle of Langside from the tower of Crookston Castle. It is a romantic notion, but unfortunately for romance, the lay of the land near Crookston makes Scott's suggestion impossible.

Nearby accommodation is calculated 'as the crow flies' from Crookston Castle. 'Nearest' may involve a long drive up and down glens or, if you are near the coast, may include a ferry ride! Please check the property map to make sure the location is right for you.

More self catering near Crookston Castle >>