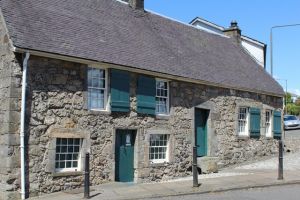 Weaver's Cottage
The Weaver's Cottage was built in 1723 for a draper and linen-weaver and has been preserved by the National Trust for Scotland to show what life was like for an 18th-century weaving family.
Kilbarchan was once an active centre of the hand weaving trade, with over 800 handlooms in operation at its peak in the 1830s. Working on looms set up in their own cottages, weaving families produced Paisley shawls, tartans, muslin, lawn, and cambric cloth to feed Scotland's thriving textile market.

Step back in time and see how traditional tartan cloth was made on a handloom using the original equipment. Visitors can try out their own weaving technique on a modern replica of the original machine, and see a collection of hundreds of small samplers woven in Kilbarchan village as well as examples of the Paisley pattern.

The cottage stands 2 storeys high and is built of rubble, with an attic under a cruck-framed slate roof. The interior has been furnished with 18th-century furniture and household objects, and there are parish records and old photographs on display to help bring to life the heritage of Kilbarchan as a centre of the Scottish textile trade.

Behind the Weaver's Cottage is a small garden growing plants used to dye the woven fabric. Visitors can watch a video on how the distinctive Paisley shawls were made, and spend time in the loom shop, with authentic handlooms and spinning wheels in operation.

The Kilbarchan weaving boom petered out in the early 20th century, and by the 1930s there were only 20 families still working at the trade on traditional handlooms. One of the last weavers in the village was William Meikle, who wove cloth to order for King George VI and Queen Elizabeth, the Queen Mother. Meikle's handloom was moved to the Weavers Cottage and you can see it here today.

Nearby accommodation is calculated 'as the crow flies' from Weaver's Cottage. 'Nearest' may involve a long drive up and down glens or, if you are near the coast, may include a ferry ride! Please check the property map to make sure the location is right for you.

More self catering near Weaver's Cottage >>