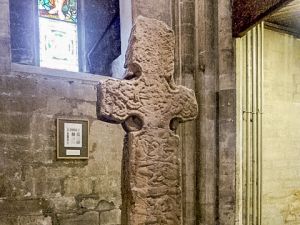 Barochan Cross
Barochan Cross is a beautifully carved Celtic cross, probably dating to before the 10th century. The cross originally stood in open country near Houston in Renfrewshire but is now within Paisley Abbey for protection from the elements.

It seems that the cross has been moved on at least two occasions in its long life; it stood first just south of Barochan Mill (grid reference NS406694), but in the 19th century it was moved to a sloping hillside near Corsliehill before eventually being brought under cover in the historic abbey church at Paisley.

The Barochan Cross is made of sandstone and stands 3.4 metres high (just over 11 feet). The surface of the cross is covered with interlaced decoration in typically ebullient Celtic style, interspersed with figures of animals and humans.

Accurate dating is difficult, but it may be as old as the 8th century. Despite the fact that the cross is inside the abbey and thus subject to the abbey's opening hours, it is actually in the care of Historic Scotland.

Nearby accommodation is calculated 'as the crow flies' from Barochan Cross. 'Nearest' may involve a long drive up and down glens or, if you are near the coast, may include a ferry ride! Please check the property map to make sure the location is right for you.

More self catering near Barochan Cross >>