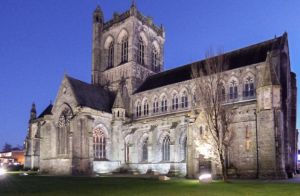 Paisley Abbey
Paisley Abbey was founded as a priory by Walter Fitzalan, the High Steward of Scotland, around 1161, on a site near Renfrew where a 6th-century Celtic church founded by St Mirin had stood. In 1169 it was moved to its current site in Paisley. Fitzalan's priory was to follow the Cluniac rule, and the first 13 monks came from the Cluniac monastery at Much Wenlock, in Shropshire.

In 1245 Paisley Priory was elevated to the status of an abbey, and dedicated to four saints; St Mary, St James, St Mirin, and St Milburga of Wenlock. Paisley grew wealthy under royal patronage, and became a centre of learning.

William Wallace, the 13th century leader of the movement for Scottish independence from England, was probably educated by the monks of Paisley. The early medieval abbey buildings were largely destroyed by fire in 1307 and rebuilt during the ensuing century.

The Cradle of the Royal House of Stewart

In 1315 Walter, the 6th High Steward of Scotland, married Marjorie Bruce, daughter of Robert the Bruce. The following year, 1316, Marjorie suffered a serious accident while riding and was brought to the abbey, where she died.

However, she was carrying a child, and the baby in her womb was saved. This 'miracle' baby grew to become Robert II, the first Stewart king of Scotland. Ever since, Paisley Abbey has pressed its claim to be recognised as the 'Cradle of the Royal House of Stewart'. Six High Stewards of Scotland are buried in the abbey, as well as Princess Marjorie Bruce.

In the 16th century, the central tower collapsed, destroying the choir and transepts beneath. A stone wall was built across the nave, truncating the original structure. The ruins were not fully restored until the early 20th century.

The abbey was disbanded at the Reformation, and the nave of the abbey church became the parish church for the citizens of Paisley. Much of the current abbey building dates to the 15th-century restoration, but a very fine 12th-century processional doorway has survived from the early medieval building, as well as the 13th-century west doorway.

Within the church is an ancient Celtic cross, found near Barochan, and brought here for preservation. It is carved with beautiful interlaced patterns and figures of animals and humans.

Nearby accommodation is calculated 'as the crow flies' from Paisley Abbey. 'Nearest' may involve a long drive up and down glens or, if you are near the coast, may include a ferry ride! Please check the property map to make sure the location is right for you.

More self catering near Paisley Abbey >>