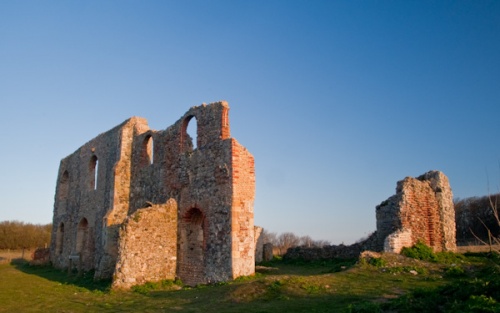 The rather scanty remains of 13th-century Greyfriars Priory stand on the slope of a hill overlooking the vanished port of this once-bustling town. Now little more than a small village, Dunwich was once a busy shipping centre, one of the busiest ports in the east of England.

At one time there were at least 15 churches and other religious establishments at Dunwich, of which Greyfriars was but one.

Other religious orders with a presence at Dunwich included the Hospitallers, Benedictines, and Dominicans (Blackfriars). However the encroaching sea buried medieval Dunwich beneath the waves, and the ruins of Greyfriars are one of the last remaining reminders of the historic past.

The ruins consist of a perimeter stone wall enclosing the monastic site, with a very attractive 14th-century gateway. Once through the gateway, you walk along a path that runs along a field boundary for about 100 yards to the remains of the monastic refectory. This was a two-storey building used for dining. The remains consist of several window enclosures and a grotesque carved head projecting from the wall.

Dunwich was founded by Richard FitzJohn sometime between 1228 and 1230 for monks of the Franciscan order (the Franciscans wore grey robes, hence the name). The priory had a fairly limited lifetime; the original Greyfriars site badly damaged in a storm in 1286 (a storm so powerful that it was dubbed 'The Great Storm'). The new priory was erected outside the town boundary in 1289.

After Greyfriars was dissolved by Henry VIII the friary was scavenged for its stone, and part of the monastic buildings converted into a house. The house (later called 'The Place') became a prison and town hall. In 1802 these later additions were pulled down, leaving only the remains of the 13th-century monastic buildings which exist as part of the refectory and the gateway.

There are two gateways; a larger, ornate gateway that was used for ceremonial occasions, and a smaller, plainer gateway used for everyday purposes by the townsfolk. There is a niche beside the small gate that may have originally held a statue of a saint. On the seaward side of the Greyfriars site is Pales Dyke, an earthwork defence that originally encircled the entire town of Dunwich.

Greyfriars is now administered by the Dunwich Greyfriars Trust, a charitable organisation composed of local residents.

Greyfriars is pretty scant in terms of monastic remains, but the site is beautifully located, as is Dunwich itself. There's something magical and very poignant about this deserted site where so many people lived and worshipped centuries ago, before the sea rolled in.

More self catering near Dunwich Greyfriars >>