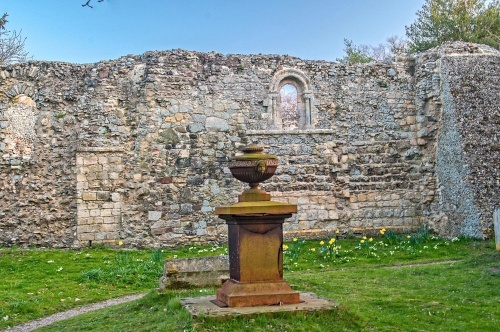 Entire books have been written about the history of Dunwich, telling the sad story of how this once populous Suffolk town has slowly been lost beneath the waves of the encroaching sea. Where once many churches stood (the exact number varies according to which source you consult) only one Victorian church now stands, spared because it lies well inland from the waves.

Ah, but lest this put you off, the Victorian church has a history worth telling, and in the churchyard stands a fascinating medieval relic of a leper's chapel.

To understand the Dunwich Leper Chapel, you have to go back in time, back to the Middle Ages, when the port of Dunwich was one of the most prosperous in East Anglia. In 1175 a law was passed that lepers should be cared for by the church and required to stay in hostels located outside of towns, to prevent the spread of the disease to 'healthy' townsfolk. It seems likely that a leper hospital was built shortly thereafter at Dunwich.

The hospital consisted of a simple hall, dormitory, and chapel. The lepers Hall measured about 65' x 25', arranged so that the inmates had a view of the altar in the chapel. There is no visible trace of the Hall left, but the walls of the chapel still stand, protected by an iron gate. The remains are not what you would call architecturally impressive, but are interesting because of what they represent about the history of the medieval period and the town of Dunwich in general.

The leper hospital was in use until the Reformation, when the care of lepers passed from church hands and became the responsibility of individual parishes. The chapel building was last used in the 17th century, and since that time has gradually fallen into ruin, though three walls still stand to a good height. It was for some time used as a burial mausoleum for the Barne family, whose grave slabs can be seen within the iron railings. 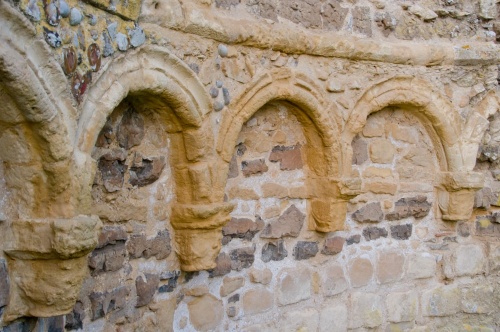 Within the crumbling walls, you can see also vestiges of the Norman architecture, including sections of very nice arcading in typical Norman style. Fragments of columns survive, with worn, carved capitals, and what looks like an aumbry, or cupboard, built into the chapel wall.

Outside in the graveyard is a section of wall brought here from All Saints church, one of the last surviving medieval churches of Dunwich, which has now disappeared below the waves. Just outside the chapel gates is an extremely peculiar monument in classical style, topped by an urn. The entire monument, urn and all, is made from cast iron, probably cast at the nearby Leiston foundry.

Online sources that I consulted before visiting Dunwich say that the chapel gates are kept locked, but actually, it was open when I visited, so perhaps the locals have decided it is worthwhile to encourage visitors. Even if the gates are locked when you arrive it should be very easy to get a good idea of the structure through the railings.

Just a short distance along St James's Street is the Dunwich Museum, which tells the fascinating story of this historic town, while off Westleton Road to the south stand the ruins of Dunwich Greyfriars priory. 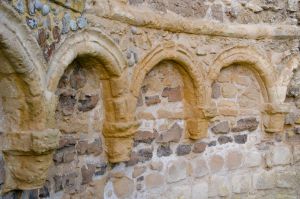