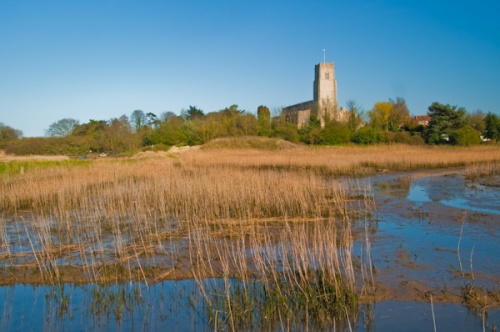 The church of Holy Trinity at Blythburgh is one of the outstanding historic buildings in a county that seems to specialise in such things. There has been a church here on the banks of the River Blyth since perhaps as early as AD 630, but the current building has its roots in the 12th century when Blythburgh Priory was founded by a group of canons from Essex. In 1412 Henry IV granted the canons the right to build the current church.

This they did in grand style, perhaps as a bit of one-upmanship, competing with nearby churches at Southwold and Covehithe. The church is huge, seeming vastly out of proportion to the size of the village, which has never numbered more than 500 souls.

Like many East Anglian churches, Blythburgh suffered from the attentions of iconoclast William Dowsing and his associates. In 1644 Dowsing removed '20 superstitious pictures ... 2 crosses ... and 20 cherubim'. It seems that the church went steadily downhill from there, as by 1847 it was described as 'mouldering into ruin', and late Victorian worshippers had to bring umbrellas into the church to protect themselves from rain during services.

Things got so so bad that the Bishop of Norwich closed the church in 1881. Then William Morris and his Society for the Protection of Ancient Buildings stepped in. The SPAB turned Blythburgh into something of a public 'cause celebre', a debate between those interested in Preservation and those keen on Restoration.

Thankfully the Victorian 'restorers' treated Blythburgh with more restraint than was their custom, and the splendid medieval architecture was gradually and sensitively restored over the last century, leaving us to admire a superb, spacious medieval tour-de-force. One of the best writers on East Anglian churches, Simon Knott, has called Holy Trinity 'the most significant medieval art object in the county', and I have to say I can't argue with him. 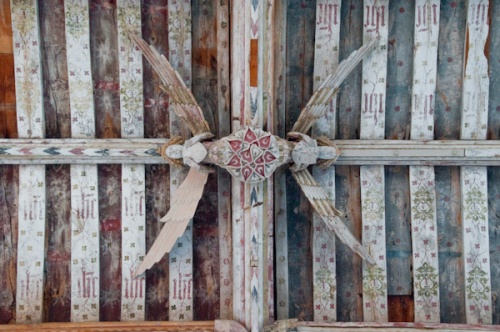 The most impressive feature of the church interior is the wonderful roof, decorated with a dozen figures of carved angels. There were originally more, before Dowsing did his bit. But why did he not order all the angels removed? Whatever the reason, the surviving angels are superb, utterly magnificent examples of late medieval art. Several of the angels are dotted with musket holes, the unfortunate effect of an 18th-century attempt to shoot down jackdaws that had found a home in the nave rafters.

Another interesting tale exists about the church. In 1577 the steeple collapsed in a storm, and fell into the nave, landing on the font. Naturally enough, given the prevailing mood of the time, the Devil was blamed for the incident. According to the tale, a black mark on the door is the Devil's hoof marks. Certainly, the damage to the font can be easily seen. This is a Seven Sacrament font, one of 13 or so in Suffolk.

Apart from the angel carvings in the roof, the other glory of Blythburgh is the wonderfully carved wooden bench ends. These are medieval survivors, though with some sensitive Victorian restoration. There are several series, or themed groups of carving, including the four seasons, the Seven Deadly Sins, and the Seven Acts of Mercy, plus assorted angel figures. There are further superb carvings in the chancel choir stalls, though these are likely to be post-medieval additions.

One of the figures is St Etheldreda, daughter of King Anna, who was killed at the nearby Battle of Bulcamp in AD 654. Turn east towards the sanctuary and you will see a rare Easter Sepulchre, one of the largest in East Anglia. The sepulchre is used as a tomb for the Hopton family. Next to the organ is a 17th-century clockjack, a mechanical figure that strikes the hours on a bell. There is another, grander clockjack at Southwold.

Once you are done exploring the interior - and that might take some time - take a stroll along the river bank, especially the far bank of the Blyth. From there, the church seems to rise above the reeds like a fairytale castle. And indeed, it is a fairy tale, a wonderful medieval tale told in stone and wood. If you have any interest in historic architecture, Holy Trinity at Blythburgh is well worth seeking out.