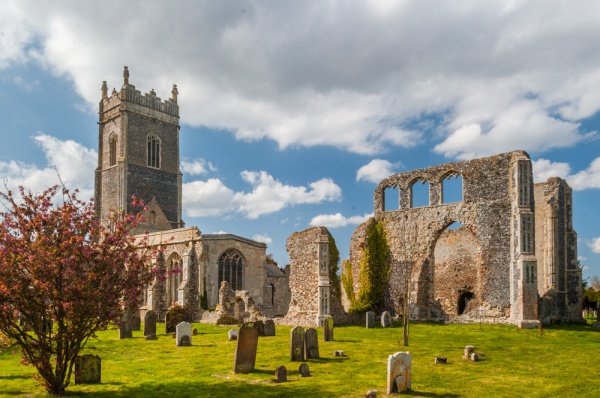 Like so many Suffolk villages, Walberswick was a prosperous place during the medieval period, when the success of the local port created a wealthy merchant class who poured their money into their parish church. From the early medieval period, there was a small thatched church well inland from the port.

In 1426 a tower in Perpendicular style was added. We can be sure of the exact date, for the contract survives between the village and a master mason named Richard Russell of Dunwich. Look for the RR monogram in the flushwork on the tower exterior.

Then in 1493 the entire church, except for the tower, was rebuilt on a grand scale, to equal the imposing churches at Blythburgh and Southwold to the north. By the turn of the 16th century, St Andrew's was one of the most impressive parish churches in England. 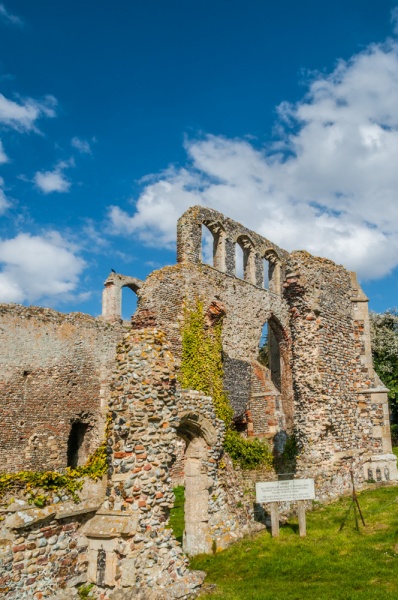 The ruined east end of the church

Unfortunately for Walberswick, the prosperity of the port did not last. The harbour suffered from silting, and when the church lost its income from tithes after the dissolution of the Monasteries the villagers were not able to maintain their grand church. The church was damaged during the tumult of the Civil War and suffered from the zealotry of local Puritans.

In 1690 the villagers sought permission to pull down the medieval church and build a smaller new church within the ruins of the old. The villagers sold lead from the church roof and three of the four bells to raise money for their new church. They re-used the medieval stone and windows wherever possible, so today we have what amounts to a 17th-century church rebuilt with 15th-century stonework.

Thankfully, the villagers were required to spare the striking 15th-century tower, which served as a landmark for sailors along the coast. The tower still stands at the west end of the new church, and the ruins of the medieval building still stand to a great height at the east end. You can walk amongst the ruins and see the magnificent flint flushwork at the east end. 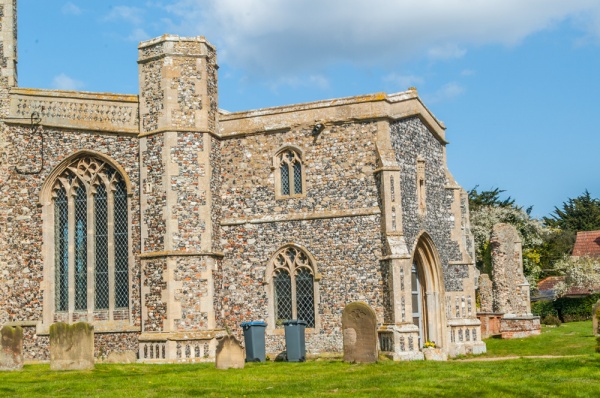 The 1696 church is well worth exploring in its own right. It is tucked into what was once the south aisle and re-uses the medieval aisle wall. It also retains the large 15th-century porch with a parvise, or priest's room, over the archway.

Several features were retained from the medieval building, including an excellent East Anglian font with carved figures of woodwoses around the stem. A woodwose is a wild man of the woods figure, usually portrayed carrying a club. It is found primarily in Norfolk and Suffolk. The bowl is carved with alternating figures of lions and angels holding shields.

The simple interior of the church has several memorials to fishermen lost at sea, a reminder that for most of its existence Walberswick has been closely linked to fishing and maritime trade. That connection is emphasised by the crucifix and candlesticks on the high altar, all made of driftwood. Atop the altar is a supermensa, a small stone slab with five consecration crosses carved into its surface. 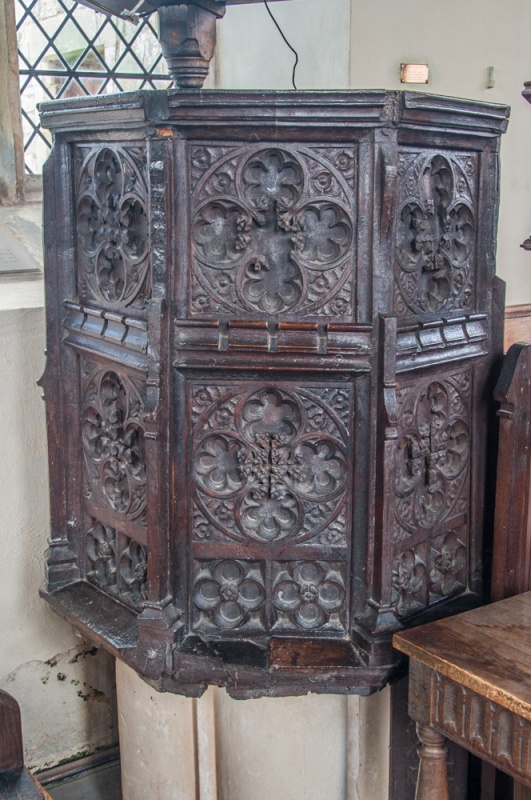 A supermensa was a consecrated stone used by travelling priests, who could carry a sacred altar with them wherever they went. Most supermensa's were destroyed during the Reformation, so the Walberswick example is a relatively rare survivor.

In one of the south windows fragments of medieval glass have been gathered together to create a mosaic.

The pulpit is original, dating to the late 15th century, with exquisitely carved quatrefoil panels.

The base of a chancel screen survives, and the choir stalls are 15th century, with wonderfully carved poppyhead bench ends. Near the high altar is an ornately carved priest's chair with a fierce lion's head below the seat.

The church is usually open daily to visitors and was open when we came to explore. There is parking along the roadside. 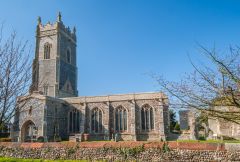 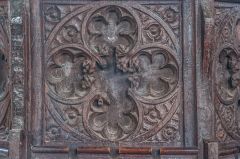 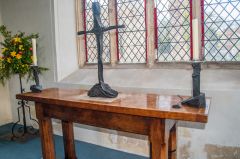