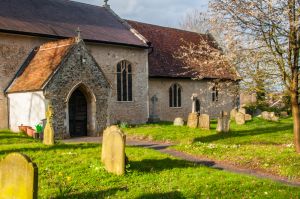 All Saints church in Darsham dates to the Norman period, though the impact of that earlier work was somewhat swept away by Victorian-era restoration. The village of Darsham lies five miles north of Saxmundham, three miles from the coast at Dunwich.

The church is built of flint, as so many are in this area of east Suffolk, with a nave, chancel, south porch and a 15th century west tower.

The oldest features of All Saints are a pair of Norman doorways. One serves as the main entrance, while the north door opposite has been blocked up. Both of these doors show very worn Romanesque carving and are probably of 12th-century date, perhaps about 1120 or even earlier.

The nave was raised in the 15th century and late Perpendicular windows added. The windows in the chancel are slightly earlier, ranging from the 14th to the 16th century.

There is an octagonal font supported by carved lions, a royal coat of arms to George IV, and carved oak pews, but the major historic interest at Darsham is provided by some very nice mid-17th century memorial brasses, including that of Anne Bedingfield (d. 1641), which shows the costume of the deceased woman in very fine detail.

On the wall is a very impressive - and very Jacobean - memorial to another Bedingfield, Sir Thomas, who served as Attorney General of the Duchy of Lancaster under Charles I.

More self catering near Darsham, All Saints Church >>

More bed and breakfasts near Darsham, All Saints Church >>