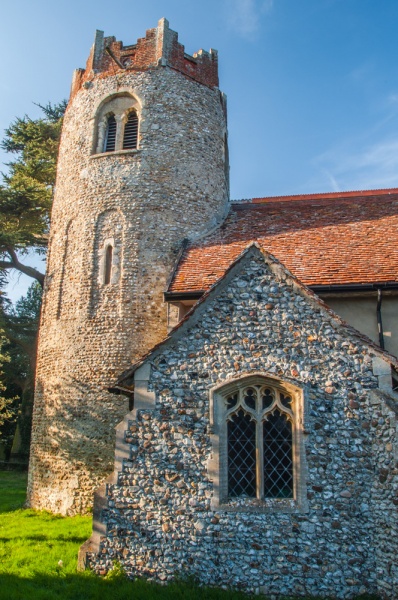 There is not much to the hamlet of Thorington beyond a few farms and the pretty Norman church of St Peter. The church dates to the 11th century, with a striking round tower of flint, and an aisleless nave and chancel.

How old is the tower? That question seems to evoke disagreement amongst historians. It has been variously described as middle Saxon, late Saxon, Saxo-Norman, and Norman. That's a span of roughly 300 years. The base of the tower certainly appears to be 11th century, with courses of flint laid in a herringbone pattern.

The three-stage tower has a Neo-Norman window on the first stage, but a blind arcade of 11 arches decorates the middle stage. These certainly appear to be either late Saxon or early Norman in style. The third stage has 12th-century double-arched openings at the belfry level. In the belfry is a single bell, cast in 1596.

It was intended for Wansted church but was given to Thorington in 1598 by Edward Coke, Attorney General under Elizabeth I, and his wife Bridget. The Cokes gave the bell on condition that it should never be sold, and it is still here some 420 years later. The rounded tower is topped by an odd 16th century octagonal parapet made of brick. 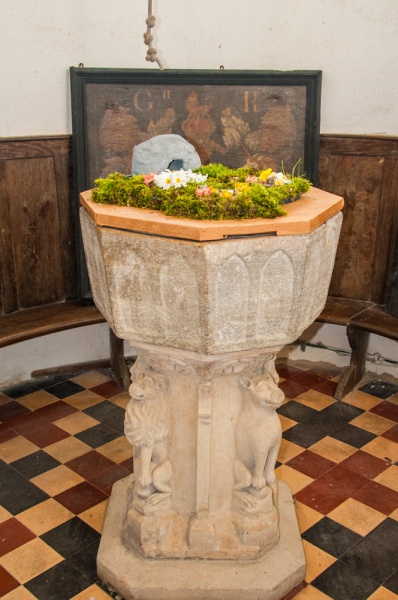 The north and south doorways are both 13th century. One curious feature is an arch above the south doorway, possibly the remains of an ornately carved Norman window.

Another unusual feature, though by no means unique, is that the chancel arch is timber rather than stone. The chancel itself is largely the result of a Victorian restoration. The tower arch was inserted at the same time, but over it is an original Norman arched window.

One of the best interior features is a 13th-century font of Purbeck marble with a pair of blank arched panels on each face of the bowl and a later 15th-century stem carved with lions. There are four lions, alternating male and female.

There are several medieval benches with carved poppyhead bench ends, and sections of a medieval screen are incorporated into the modern choir stalls. A striking wooden reredos, installed in 1881, stretches the entire width of the chancel, and the communion table is 17th century. 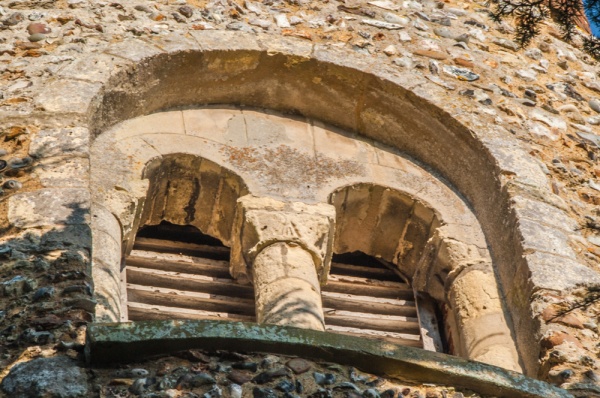 Sitting on a bench beside the font is a royal coat of arms to George II, and resting on nearby benches are a pair of funeral hatchments to members of of the Bence family, featuring a coat of arms with a castle in the centre of a red cross.

On the north wall of the chancel is a very nicely carved monument to the Bence family, including Maria Bence, who died in 1756. In the nave is another tablet to Anne Bunce (d. 1794).

The east window was installed in memory of yet another Bence, Rev. Thomas Bence, who died in 1858. The north-east window commemorates his father, Henry Bence.

Above the communion rails is a brass plate in honour of Robert Gould, another rector of Thorington, who died in 1620. Beside the east window is a memorial to Jane Lovelace, who died in 1630 at the age of 108. The epitaph is a beautiful period piece of verse, reading:

Here resteth Jane, the daughter of Francis Monke, esquire, first married to Roger Day, gentleman, and, after his deceae, to Richard Lovelace, of Kingsdowne in the county of Kent, esquire, whom she also outlived but had not any child by eyther of them. She was a godly, sober, and virtuous woman, and lived (by a blessing of God) until she was one hundred & eight years of age. In whose honoured memory Henry Coke, esq. & Margaret his wife (sole daughter & Heire of the said Richard Lovelace by Elizabeth his former wife) have erected this monument. This Jane for the affectionate love she bare as wel to her husband Richard Lovelace, as to the said Henry and Margaret & their children gave all hir estate of good value to those children, as by hir last will appeareth. She Christianly and peacibly passed out of this mortal life the 12 day of june 1630, in the favour of God and good men. at the feet of the said Jane Lovelace lye buried the bodies of Richard and Thomas Coke sons of the abovesaid Henry, and Margaret. Robert dyed 20 Dec. 1630, Thomas dyed 18 April. 1631 - both infants. 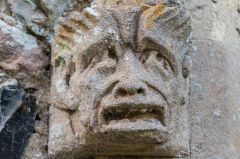 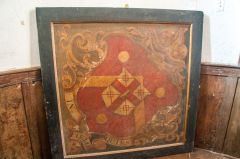 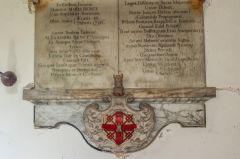 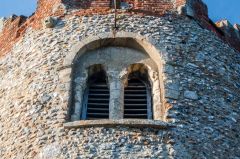 Self Catering near Thorington