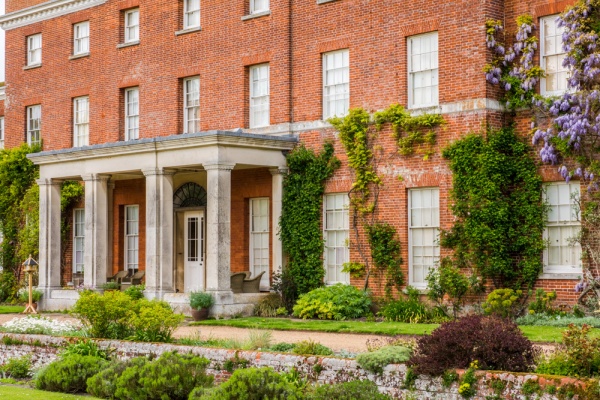 At Raveningham Hall, attractive 19th-century formal gardens surround an elegant Georgian house, with a walled garden dating to the 18th century. Raveningham specialises in rare and unusual shrubs and herbaceous plants. Raveningham Hall is the family home of the Bacon family, and the present gardens were planted by the current owner's mother some 50 years ago. 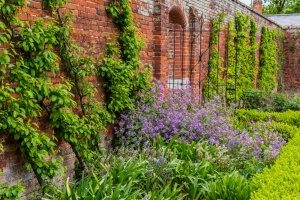 The walled garden at Raveningham

The Bacon family gained Raveningham by marriage in 1735. When the Bacons came here the manor house was enclosed by a moat, which can still be seen about 500m south-west of the present Hall. Sir Edmund Bacon built the Hall we see today on a new site, much closer to the medieval parish church of St Andrew. We do not know exactly when the Hall was built but it was in existence by 1783.

The Hall is built of red brick and topped by black pantiles. In common with most Georgian houses the front facade is symmetrical, with seven bays and a central porch. Sir Edmund Bacon also created a stable block in the same style, with a clock-turret and bell tower.

The Bacons had the road from Beccles to London closed to create a new landscape park. The park now extends to 70ha, with 3.5ha as gardens.

Within the garden is a walled kitchen garden that dates back over two centuries, an Edwardian rose garden, colourful herb beds, an orchard, modern garden sculptures, and a Victorian greenhouse. In the park is a modern lake, created to celebrate the Millennium. North-west of the walled garden is an arboretum, developed from a 19th-century pleasure-ground wood after the wood had been damaged by the terrible storms of 1987.

One intriguing feature at Raveningham is the Time Garden, planted according to the theories expressed in Francis Bacon's Essay of Gardens. Bacon (1561-1626) served as Lord Chancellor of England, but he was also a philosopher and scientist. In 1625, just the year before his death, Bacon wrote a short essay on garden design in which he made the case for a formal enclosed garden typical of those found in early 17th century Italian and Northern European gardens.

He recommended a garden based around a mount, or viewing mound, with fountains, topiary, and clipped hedges in a square layout. Bacon knew his aristocratic audience and recommended a garden of no less than 30 acres, filled with heavily scented flowers like roses, violets, and sweet-briars. 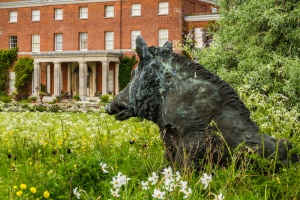 A boar sculpture in front of the Hall

Another unusual feature is the Stumpery, created with the upturned stumps of uprooted trees, so that the tangle of roots create sculptures.

Within the gardens stands St Andrew's Church, dating to the 12th century. St Andrew's is one of 124 Norfolk churches with a round tower. The church was established by the Castyll family, who held the manor for almost 500 years. Within are tombs to the Castyll and Bacon families, including a memorial brass to Margaret Castyll, who died in 1483.

In addition to normal opening hours in Spring through to Autumn, there are usually special late winter openings to see the snowdrop displays. See the Raveningham Garden website for details.

The gardens are well signposted from surrounding roads. We came on a sunny summer day in June and were surprised to find only a few cars in the large parking area. There was no visitor centre, just an unmanned kiosk with an honesty box and garden information, and sheets to sign in for Historic Houses Association and Royal Horticultural Society members. It would have helped enormously if there had been garden maps to take around with us, but we managed to make our way around the walled gardens and the Hall (with the aid of strategically placed 'Private' signs).

The formal areas are fascinating, but the most enjoyable part of the experience was the mix of formal and informal garden areas around the front of the house. There were several interesting modern sculptures by Sarah Bacon arranged around the garden, including a striking boar statue rising above a stand of wildflowers in front of the house. I can only assume that the boar was a play on words of the family name, Bacon.

I was ready to leave, thinking I had seen all there was to see, when a passing gardener asked if I had seen the Stumpery. I hadn't so he pointed the way through the grounds to a small pond, created to mark the Millennium. Beyond this was the Stumpery, an avenue lined with upturned tree stumps, their branches creating the most amazing natural sculptures. I've been to a lot of historic gardens, and see a lot of stumperies, but never one as striking as this. 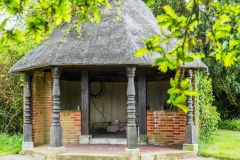 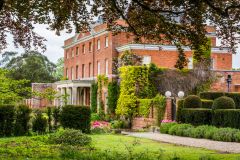 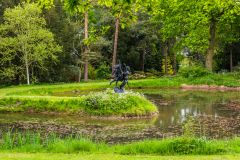 More self catering near Raveningham Hall >> 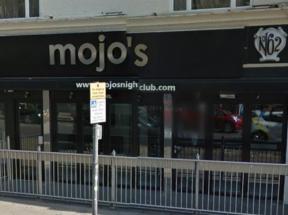