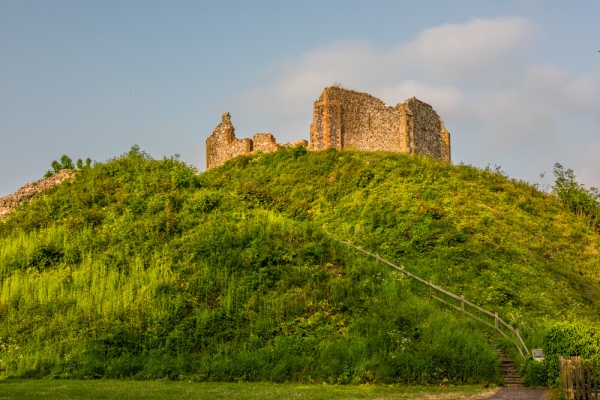 Eye Castle is an 11th-century motte and bailey castle with substantial 12th-century curtain walls. The castle stands atop an earlier Saxon mound that was probably the only high ground in north Suffolk. 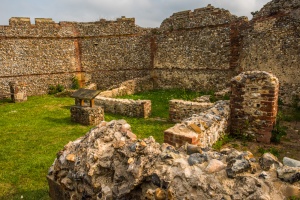 The Victorian house
atop the castle motte

The castle was begun shortly after the Norman Conquest by William Malet. We do not know exactly when building began but it must have been before 1071 when Malet died putting down Hereward the Wake's rebellion.

Malet's son Robert was exiled by Henry I in 1102 and Eye was seized by the crown. King Henry granted the castle to Stephen of Blois, later King Stephen.

Henry II then granted Eye to his good friend and advisor Thomas Becket (St Thomas), and it seems likely that it was Becket who rebuilt the earlier timber fortress in stone. After Becket was murdered in Canterbury Cathedral in 1170 the castle reverted to the crown.

The castle was attacked by Hugh Bigod, Earl of Suffolk, during his abortive revolt in 1173. The castle withstood Bigod's men, but was so badly damaged that it had to be rebuilt.

Henry III gave Eye to Richard, Earl of Cornwall. It was heavily damaged during the Baron's Rebellion of 1265, and by the late 14th century it was recorded as a ruin.

In the 16th century, a windmill was built atop the mound. The castle was held by numerous owners until it was finally destroyed by Cromwell's men in the Civil War. 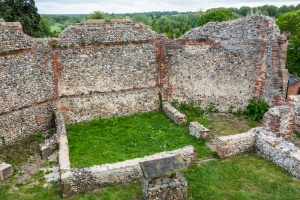 Remains of the Victorian dwelling

In 1816 the ruins were pulled down to make way for a house built by Sir Edward Kerrison. This house, sometimes referred to as a Victorian folly, makes up the majority of the ruined structure atop the mound.

Kerrison did not build the dwelling for his own use, but to reward his batman, who saved his life during the Battle of Waterloo. You can see the excavated remains of the dwelling, including a kitchen and small living area.

In the 1830s a school and workhouse were built inside the western end of the inner bailey. In the 1980s these were replaced by a modern housing development. The outline of the outer bailey is suggested by the medieval street pattern; the bailey covered about 350 metres by 150 metres, and followed the course of Castle Street, Church Street, and Broad Street. It is possible that another bailey existed surrounding St Mary's churchyard.

The castle mound is 12 metres high, with a sloping top rising to 17 metres in the east corner and a circumference of 57 metres at the base. The original castle buildings are almost gone; only vestiges of a dungeon and square bastion remain, and the other visible remains are those of the 19th-century house.

Within the small bailey is a well, but most of the other medieval structures have been obliterated. There is a surviving section of curtain wall on the north side of the bailey, stretching some 27 metres and standing to three metres high in places.

The castle is not well signposted but it is very easy to find. Just look for the short, steep lane called Castle Hill, leading off Castle Street. There is a set of gates to the castle grounds which are normally locked at dusk. Inside the gates is a small picnic area inside the bailey, where you can see the remains of the Norman castle wall. A trail leads up the motte to the Victorian house, or folly.

The remains of the castle buildings are quite scant, though the motte is still quite impressive. What makes the climb to the top of the structure rewarding is the wonderful view, especially down onto the historic parish church and timber-framed guildhall.

As an aside, I found Eye itself to be a delight; there are numerous historic buildings, easily explored with the aid of a town trail leaflet available locally. 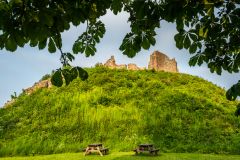 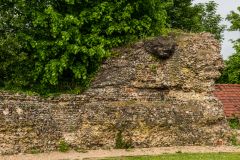 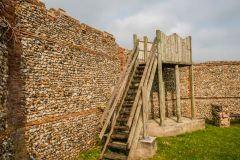 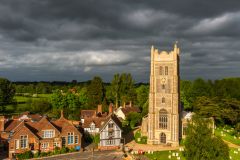 More self catering near Eye Castle >>

This semi-detached cottage is located in the hamlet of Thornham Magna near to Eye in Suffolk and can sleep four people in two bedrooms.
Sleeps 4 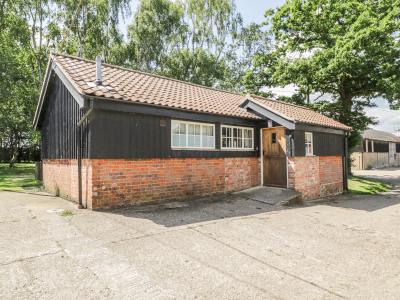 This detached cottage resting on the outskirts of the town of Eye, sleeps up to two people, in one bedroom.
Sleeps 2