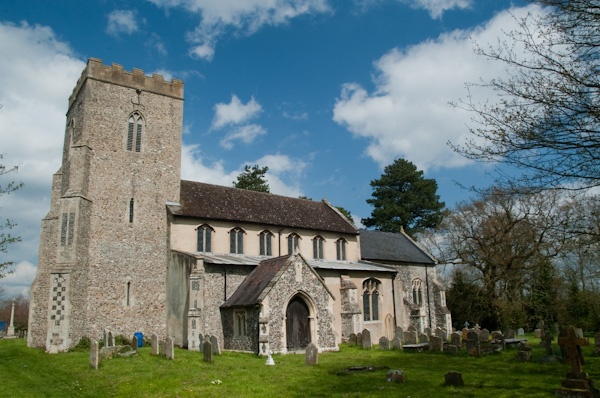 Yaxley's delightful parish church dates to the early 14th century and was rebuilt and enlarged in the 15th century. One of the results of that rebuilding was the beautiful north porch, decorated with beautiful flint flushwork and boasting a parvise, or small priest's chamber, over the entrance arch.

The porch was a gift of the Yaxley family in about AD 1480 and rises as high as the nave eaves. The outer arch is decorated with carved figures including St Blaise atop a monster, and Hercules battling the Nemean lion. Look for figures of small dogs carved around the arch spandrels. Over the arch is a frieze of panels with coronets and the repeated initial 'M', for the Virgin Mary, to whom the church is dedicated.

The chancel was rebuilt and a south porch added in 1868. At the west end of the nave is a striking 14th-century tower, curiously lacking an entrance door. 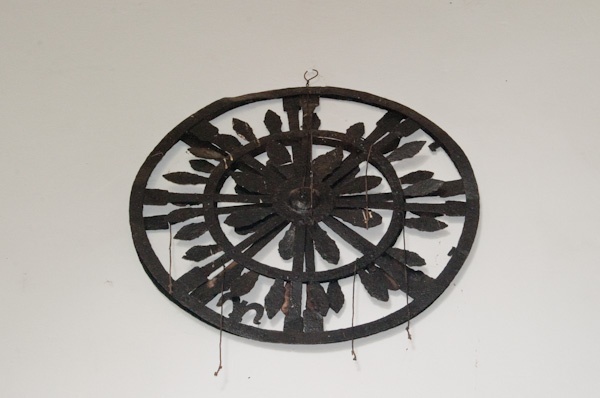 The Sexton's Wheel over the entrance door

One of the most interesting historic features of the church is a 'sexton's wheel' over the south door. The wheel was rotated by pulling a string so it would spin to indicate which of the feasts of the Virgin Mary a penitent should fast. No one knows exactly how it was used, but it seems likely that each string indicated one day of the Marian feast days. A parishioner would grab for one of the strings dangling from each section of the wheel, and whichever string they grabbed, that was the day they began their fast.

Think of it as a medieval version of a spin indicator on modern board games; a way of randomly picking one of several options. It looks rather like an extremely complex clock face, with overlaid rings of iron pointers and section dividers. There is only one other sexton's wheel in existence in England, and other is just 10 miles north, across the Norfolk border, at Long Stratton.

The Sexton's Wheel is also depicted on the Yaxley village sign. The sign shows a cuckoo atop the wheel (the village name comes from the Old English for a cuckoo in a woodland clearing).

One of the historic highlights inside the church is a painted chancel screen. The screen is divided into four panels on each side of the central passage. The north panels have been defaced but the south panels are clearly painted with figures of female saints, including St Magdalene, St Dorothy, St Barbara, and St Cecilia. The tracery on the upper part of the screen is sublime, with delicate embellishments rising up from the base like patterns of lace. 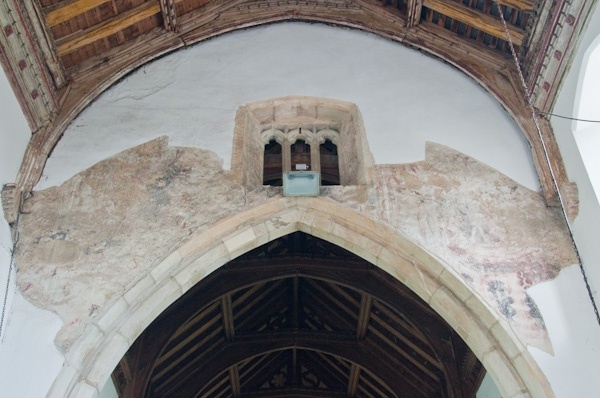 The medieval Doom painting over the chancel arch

There is also a screen across the tower arch, made up of pieces of 17th-century panelling and decorated with fragments of 14th and 15th-century stained glass.

The hexagonal pulpit dates to 1635 and is beautifully carved with Biblical texts, scrolls, shields, and arabesques. Look for the initials TD and TF on the tester, which is supported on brackets carved like griffins. The carving detail is exquisite, and Yaxley's pulpit must be one of the finest in Suffolk, if not in all England.

The window nearest the pulpit has beautiful Victorian stained glass depicting Holman Hunt's famous Light of the World painting. The window was installed in memory of William Henry Sewell, son of a former curate and rector for 35 years from 1861-1896. It was Sewell who had the medieval building so beautifully restored, and he who gathered together the excellent stained glass.

The 15th-century font is plain by Suffolk standards. The octagonal bowl is supported on 8 round shafts clustered around the central stem.

Over the chancel arch is a Doom, or painting of the Biblical Day of Judgement. Though the Doom is quite worn, you can make out a deliciously terrifying figure of a devil with his tongue hanging out. He is portrayed with spikes sticking out of his back and claws for hands and feet. In another part of the painting you can see a grinning devil welcoming sinners to Hell, while one of the sinners wrings his hands in useless supplication.

On the north wall of the chancel is a 14th-century recess decorated with a painting of a clerical figure. 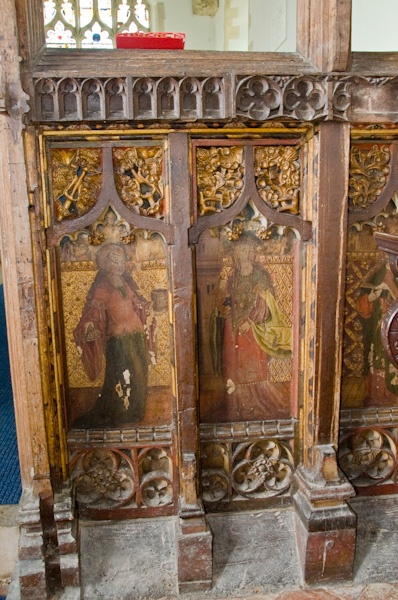 The medieval screen base

Set on the wall is a fascinating collection of carved heraldic shields, part of a memorial to Richard Yaxley, who died in 1588.

In the south aisle floor is a brass to a member of the Felgate family, dated 1598, while in the chancel floor is a grave slab to P Yaxley (d. 1706). Even older is a brass to R Yaxley, dated 1474. There are 13th-15th century glass fragments in the east window, and more 15th century glass in the heads of the nave windows. Much of the glass came from continental Europe.

On the west wall of the south aisle is a funeral hatchment to Rev. Leke, who died in 1798.

Other historic features that caught my eye include a sturdy medieval parish chest, bound with iron straps.

St Mary's church is a delight to visit. There are so many fascinating bits and bobs of historic interest, and the woodwork is excellent. The church is normally open to visitors daily and was open when we visited. 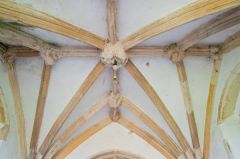 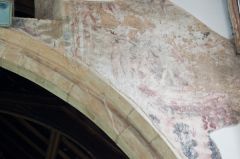 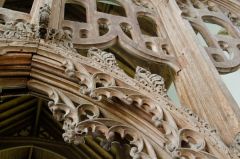 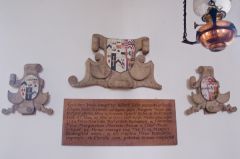