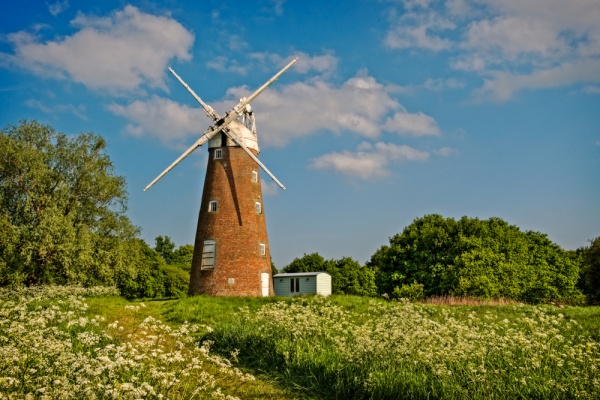 Billingford Mill is a restored 5 storey tower mill, built in 1860. It is topped with a boat-shaped cap controlled by a six-bladed fantail, turning four double patent sails. There are three pairs of millstones; the third set on the ground floor can be turned by engine rather than by wind power.

The mill stands 36 feet high (roughly 11 metres) and is built of red rick. The upright shaft is made of cast iron and is 4.5 inches diameter (114 mm). The mill is listed Grade II for its heritage value.

Though the mill we see today dates to 1860, it stands on the site of a much earlier post mill, shown on a 1797 map of the area. The post mill was damaged in a storm in 1859 and had to be rebuilt, but instead of rebuilding in the same style, the new mill was built as a tower mill, erected by William Chaplyn at a cost of £1300. It was the last corn mill in Norfolk to be powered by wind.

The mill was designed to work on convection currents of air, which enabled it to keep turning even when mills on higher ground were still.

Above the west door is a date stone inscribed with 'Mr. G. Goddard March 1860'. George Goddard was the tenant miller when the post mill was destroyed, and he continued in this role as the first miller for the new tower mill.

On the brake wheel is a tablet inscribed 'W. SKINNER 1860', leading some historians to ascribe the new mill to Skinner, which is technically incorrect. Skinner was the builder, but the owner who paid for the work was William Chaplyn, owner of the Rose Lane mill in Diss. Near the mill are the foundations of outbuildings used to hold oil and steam engines, but none of these outbuildings is intact. 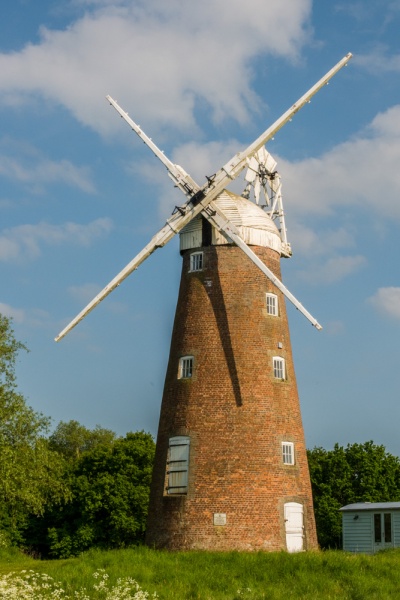 A closer look at the mill

In 1872 the miller Henry Pike was brought to court to answer a charge of selling barley meal unfit to eat. He admitted to adding starch fibre to the meal, but was acquitted on the basis that the meal was still fit for consumption.

An oil engine was installed in 1928 to provide power on windless days. The mill continued in operation using wind power until 1956, and for another 3 years using the oil engine, but in 1959 it closed down for good. The mill was restored from 1962 by Victor Valiant at a cost of £4000 and presented to the Norfolk County Council. It then became the first mill to be acquired by the newly formed Norfolk Windmills Trust.

The Billingford Mill is still cared for by the Norfolk Mills Trust, who operate 21 historic mills around the county. Most NMT properties are open regularly and can also be visited by appointment.

Billingford Mill is open on regular days throughout the year, notably for the National Mills Weekend, as well as other days (usually Saturdays). See the official Norfolk Mills Trust website for current details.

The mill is very easy to find. It is located opposite the popular Billingford Mill pub, just off the A143 east of Scole village. Both mill and pub are on a minor road south of the A143, and can easily be seen as you approach the junction, particularly if you approach from the west.

There are usually Trust volunteers on hand for open days, and there is a small entry fee.

About Billingford Mill
Address: Billingford, Norfolk, England
Attraction Type: Historic Building - Mill
Location: Off the A143 1 mile east of Scole, opposite the Billingford Mill pub. The nearest postcode is IP21 4HL, which takes you to houses on the A143, just east of the turnoff.
Location map
OS: TM167785
Photo Credit: David Ross and Britain Express

More self catering near Billingford Mill

The Meadows Cottage
Billingford
Sleeps 6, from £419.00