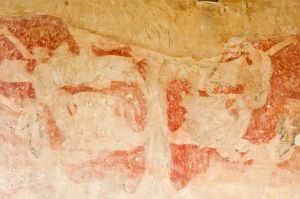 Most of Hoxne's attractive parish church is 14th-15th century, in Perpendicular style, though there are parts of much earlier buildings incorporated into the fabric, indicating the great age of the site.

The striking tower was built by John de la Pole, the 2nd Duke of Suffolk, in 1450. In the same year, the south porch was added. Inevitably there is some Victorian remodelling, but for the most part, St Peter and St Paul's retains its medieval character.

One of the most interesting historic features of Hoxne church is the series of medieval wall paintings on the north wall of the nave and over the arcade arches. These date to 1390-1400. Among the themes are St Christopher bearing Christ, the Seven Deadly Sins, the Acts of Mercy, and the Last Judgement.

Also of great age is an iron-bound chest made of elm. This dates to the 14th century and acted as a parish strongbox for important documents. It is secured by seven locks, one for each trustee of the parish.

The font is typical of those found throughout East Anglia, with an octagonal bowl and alternating panels of angels with heraldic shields and saintly emblems. One of the heraldic shields bears the arms of Bishop Lyhart of Norwich, who built the Hoxne vicarage. Bishop Lyhart died at his palace in Hoxne on Whit Sunday, 1472.

The carved angels supporting the font bowl have been defaced, and we have an exact record of the event, for William Dowsing, who was responsible for so much destruction in Anglian churches, recorded in his diary for 30 August 1644, the destruction of 'The Virgin Mary with Christ in her arms and cherubims wings on the font.'

There are several grave slabs to members of the Thruston family, dating to the 16th century, and several 15th-century tombs. In addition, very early hatchments to Sir Robert Southwell (d. 1598) and his wife Elizabeth hang on the wall.

On the south wall is a very finely crafted memorial to General Sir Edward Kerrison (d. 1853), who fought at the Battle of Waterloo and later served as an MP. Another Victorian memorial commemorates the loss of the HMS Captain, the first naval vessel to use both wind and steam power. The Captain was lost in a storm in the Bay of Biscay in 1870, with a loss of 582 men. The commander of the ship was Captain Burgoyne, the son-in-law of Admiral Wake-Walker of Hoxne.

Another interesting monument is that of Thomas Maynard (d. 1742) of Hoxne Hall. Maynard's marble monument was carved by Charles Stanley, sculptor to the royal court of Denmark.

At the west end of the church is a display area of local history artefacts, including information on the Hoxne Hoard of Roman treasure, the St Edmund legend, and the Bishop's Palace.

Beside the church, and visible from the church car park, is the moated vicarage. The moat may predate the 15th-century vicarage buildings, and may possibly indicate the site of the early bishop's palace at Hoxne, or of a priory of monks associated with it. 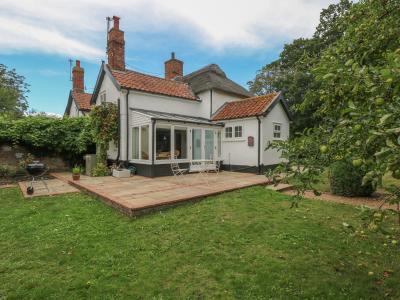 This semi-detached cottage rests in Hoxne, Suffolk and can sleep six people in three bedrooms.
Sleeps 6 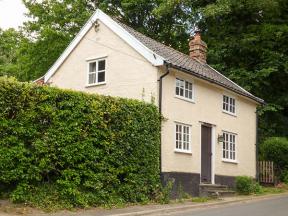