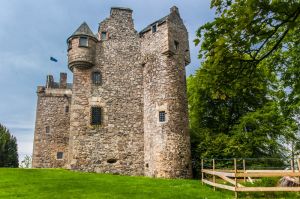 Elcho Castle is a wonderfully well-preserved 16th-century fortified house on the south bank of the River Tay, just outside Perth. Unlike so many fortified houses of the period, Elcho remains complete and well-roofed. The interior features very attractive decorative plasterwork.

Elcho Castle was built about 1560 by a member of the Wemyss family. The family gained status, and a descendant was named Lord Wemyss of Elcho in 1628, and Earl of Wemyss in 1630. Despite its bristling gunports and formidable defensive appearance, Elcho was first and foremost a comfortable family residence, an impressive country house designed to reflect the status of the Wemyss family.

The castle was used until well into the 18th century when it fell into neglect. The castle was repaired by the 8th Earl in 1830, and in 1929 the 11th Earl granted it to the crown.

The current castle probably stands on the site of an earlier fortification, but the first historical records date to 1429. The castle stands near the site of Elcho Priory, and it seems probable that Sir John Wemyss (d. 1571) was granted the lands in exchange for a donation to the priory.

From an architectural viewpoint, Elcho is important as it marks the transition from earlier defensive castles to the age of mansion building in Scotland. At Elcho, the exterior maintains a fiercely martial outlook, while the interiors are designed with comfort and lavish living in mind.

Visitors pass through a range of impressive inner chambers, rising from a kitchen and storage area at ground level to a great hall, the social hub of castle life. From there, stairs lead up to smaller chambers and up to guard posts at roof level.

What really makes Elcho interesting are the range of family apartments, where the Wemyss family created their own, separate living space far from the bustle of the hall. There are traces of extremely fine plasterwork decoration in the family rooms, and elaborate fireplaces, again a mark of the family's social status and wealth. 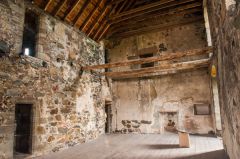 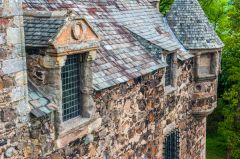 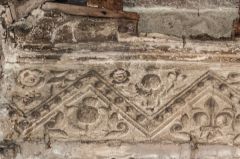 More self catering near Elcho Castle >>