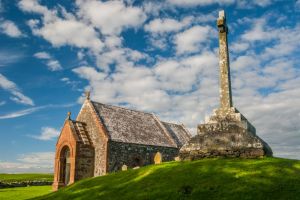 The modern chapel at Kirkmadrine is home to three of the earliest surviving Christian carved stones in Britain. The three stones date from the late 5th or early 6th centuries and reportedly stood for many years in the churchyard. The carved stones are displayed in a plexiglass case rather oddly set into the exterior of the west wall of the chapel, which serves as a burial aisle for the MacTaggarts of Ardwell.

The stones apparently stood in the churchyard as late as 1820 but were then moved. Two were discovered acting as gateposts at the entrance to the burial ground, and the third was serving as a gate pillar to Stoneykirk Church Manse nearby. The stones feature the chi rho symbol (stylised cross shape) and partial Latin inscriptions.

Why were the stones here? One possibility is that Kirkmadrine was the site of a very early monastery, indeed, it was marked as such on Ordnance Survey maps. However, aerial photography shows no evidence of a circular enclosure which you might expect to find surrounding an early monastic site. So it is possible that the stones were originally set up somewhere else in the area and only later moved to the burial ground at Kirkmadrine.

The churchyard is a wonderfully peaceful place. My only quibble about visiting is that the protective glass over the stones was rather scratched and reflected the light so much that it was rather difficult to see the stones as clearly as I would have liked. But that aside, there is something fascinating about the simple stones and the fairly basic early Christian carving. 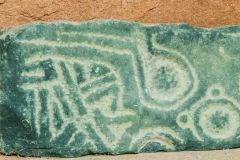 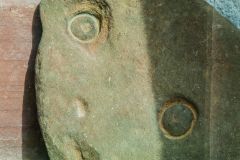 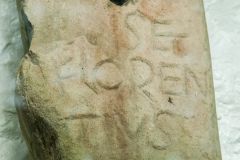