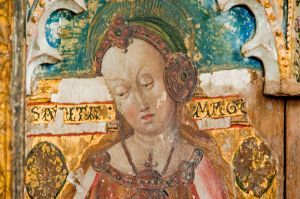 The church is St Andrew's in Bramfield is a delightful building, full of historical interest. The most obvious feature, and the most unusual, is the round tower, standing well aside from the main body of the church. This is the only flint-built detached round tower in Suffolk and dates to the 12th century.

It may possibly have been built to serve as a defensive stronghold for the nearby manor house, as well as to serve as a bell tower for the church. The tower stands over 40 feet high, with walls 4.5' thick. Within the tower is a ring of 5 bells, three of which were cast in 1440.

Most of the church is 14th century, replacing a timber church mentioned in the Domesday Book. This is a simple, thatched building consisting of only a nave and chancel.

On to the interior - over the vestry door is the banner of the 1st Lord Gladwyn of Bramfield Hall, and there are a series of hatchments to the Rabett family of Bramfield Hall. Note the rabbits in the family coat of arms, a rather obvious play on words.

On the north wall is a partial wall painting from the 15th century. This is set within a niche and shows a white cross with four angels clustered around it.

The pride of St Andrew's is the wonderfully ornate rood screen. This dates to the late 15th or early 16th century. Only the canopy is restored; all the rest is original late medieval work, and it is spectacular. The base of the screen is painted with likenesses of the four Gospel writers and Mary Magdalene.

The chancel is a treasure trove. Here you will find a marvellous monument to Arthur Coke (d. 1629) and his wife Elizabeth (d. 1627). Arthur is kneeling in prayer, while Elizabeth lies recumbent on a bed beneath him, holding an infant. The alabaster effigy of Elizabeth Coke was crafted by Nicholas Stone, who also worked on Westminster Abbey and served as a master mason to both James I and Charles I.

Near the tomb is a funerary helm and breastplate. In the floor are slabs commemorating members of the Rabett and Nelson families. The chancel is glazed with some very nice Victorian stained glass in memory of Nicholas and Elizabeth Simons.

St Andrews is a very enjoyable church to visit, full of historic interest.