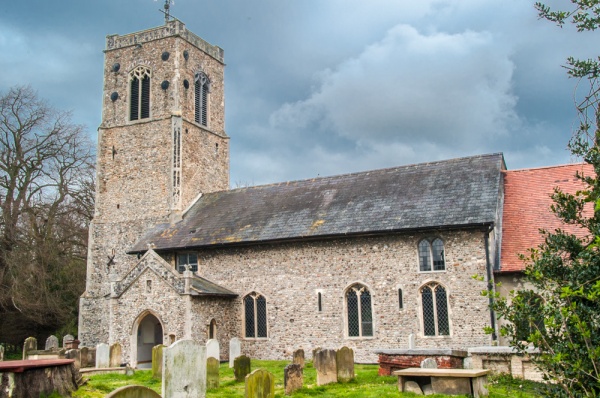 No, not the name of a John Grisham novel nor a new post-apocalyptic Holywood film, the Wenhaston Doom is a superb medieval painting depicting the Biblical Day of Judgement, painted on boards that once hung over the chancel arch of St Peter's church in the pretty Suffolk village of Wenhaston.

Not many people find their way to Wenhaston, located off the beaten track but just a few miles from the famous medieval church at Blythburgh. Those that make the effort to seek out Wenhaston are rewarded with one of the most remarkable medieval works of art in Britain.

Like so many medieval paintings in country churches the Wenhaston Doom was discovered by accident. In 1892 the chancel was undergoing restoration work. The workmen removed some old whitewashed boards blocking the upper section of the chancel arch. Without ceremony, they threw the boards into a heap in the churchyard.

That night it rained, and the water leached away the whitewash, and when the workmen returned it was to discover that the boards were covered in early 16th-century paintings. The paintings were made between 1500 and 1520 (some sources think the paintings were made a century earlier, around 1400), and depict the Day of Judgement, when the dead rise from their graves and souls are weighed to determine if they go on to Heaven or are banished to Hell.

This is the 'Doom', the day of reckoning, and a frequent subject for medieval wall paintings. Dooms are usually painted over the chancel arch, directly on the stone walls. For some reason, the Wenhaston Doom was painted on boards, which were then fixed to the arch, with space for the Rood, or large cross that topped a rood screen under the arch. 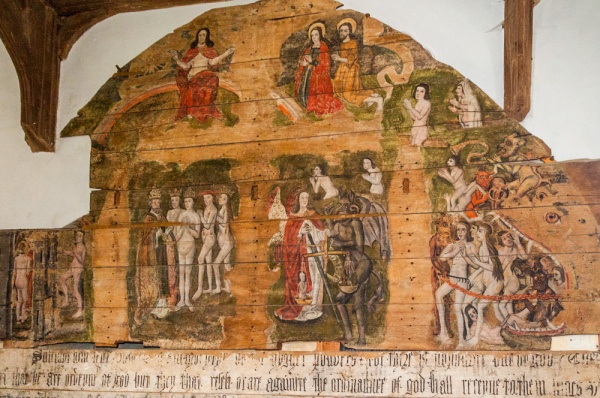 Shortly before 1550, the boards were covered in whitewash to hide the paintings from view. This happened during the reign of Edward VI, a firm Protestant, when colourful images like the Wenhaston paintings were considered idolatrous and suspiciously Catholic.

Most churches did not destroy the paintings, but simply covered them over, and that's what happened here. And as usually happened, the paintings were forgotten over time, and lay there untouched, protected somewhat by their coating of whitewash until a chance discovery revealed them again.

To the left of the rood cross is Christ seated on a rainbow, while to the right are figures of St John the Evangelist and St Mary. St Michael the Archangel is depicted carrying a sword and holding a scales for weighing souls. On the left-hand pan of the scales, a Godly soul lowers the scales, his good deeds outweighing his sins. On the right pan, a pair of wicked imps sit while Satan watches the action, holding a scroll inscribed with a Latin prayer. The inscription translates as 'Now for what is lacking may you give pardon for sin'. The devil has a second face showing on his belly. 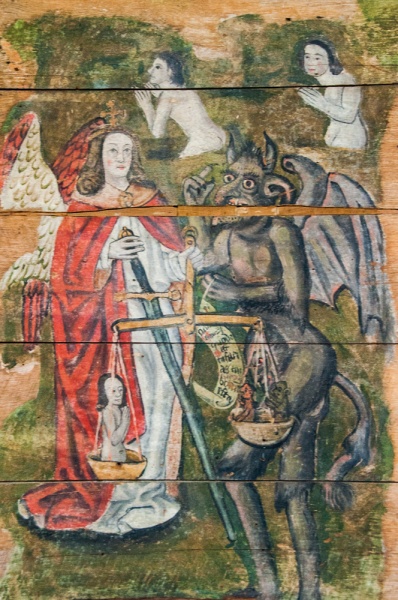 Another part of the scene shows St Peter in his papal robes, holding a golden key to unlock the gates of Heaven. Before him are a naked king, queen, cardinal, and bishop. They have been judged and found acceptable, and serve as an example to humbler folk. There is also a symbolic message in the four figures of temporal and spiritual authority; be loyal to the Church and State. Beyond St Peter is Heaven, with a naked figure being taken by the hand and led into a large tower.

Opposite these figures are damned souls being led into Hell by horned demons. Hell is represented as a huge beast with jagged teeth, opened wide to devour the sinful. 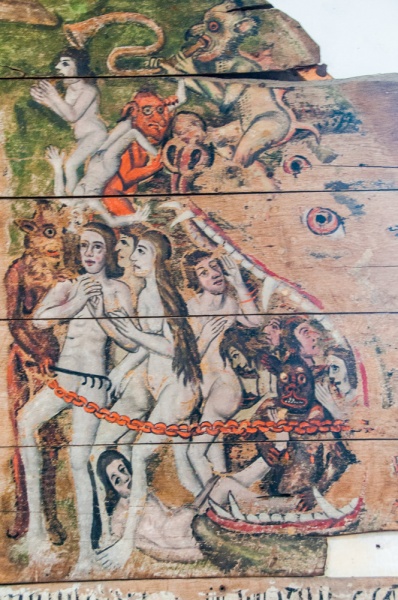 Sinners being led into Hell

Underneath the Doom is a later inscription from Romans XIII I-IV, reading:

'Let every soule submit him selfe unto the authorytye of the hygher powers for there is no power but of God the Powers that be are ordeyend of God, but they that rest or are againste the ordinaunce of God shall receyve to them selves utter damnacion. For rulers are not fearefull to them that do good But to them that do evyll for he is the mynister of God.'

The Doom has been reassembled and is set against the north wall, making it the easiest Day of Judgement painting to study up close of any I have visited in England. It is nationally recognised as one of the great medieval paintings in England and perhaps the finest Doom painting in existence.

The hidden paintings survived Cromwell's Commonwealth, when iconoclasts like William Dowsing scoured East Anglia for Papist images in a frenzy of destruction. Dowsing visited Wenhaston, and destroyed windows, tore carved angels from the roof, and had the pulpit, altar, and organ removed from the church. It seems remarkable that there are still so many historic features to enjoy! 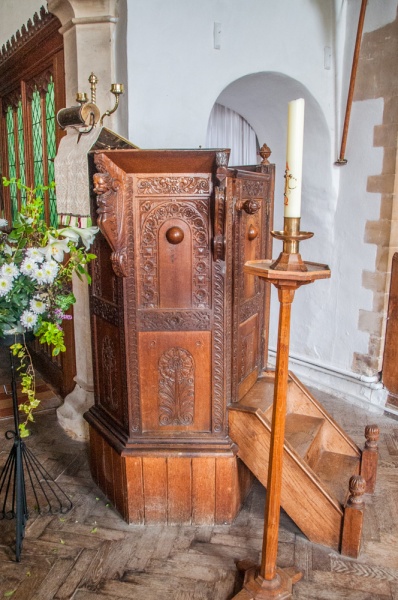 What (else) to See

There has been a church at Wenhaston since the Saxon period, when it was owned by Blythburgh Priory. Most of the present building dates to the 14th and 15th centuries. The south door retains its medieval sanctuary knocker. Just inside the door is a beautifully carved wooden panel that must have formed part of a Jacobean pew. at the east end of the nave is a Jacobean pulpit with more excellent carved details, including figures of angels on the book rest brackets.

The chancel roof is decorated with carved bosses, and the choir stalls have very good carved bench ends. The east window has colourful Victorian glass, and on either side are 18th-century marble monuments to members of the Leman family.

At the west end of the nave is a plain octagonal font, along with a royal coat of arms to George III and a charity board. On the wall of the vestry are a collection of manacles from the village stocks along with a very businesslike Georgian truncheon.

The church is open daily to visitors and there is parking opposite, by the village hall. I can't recommend St Peter's highly enough. The Wenhaston Doom is simply stunning, an incredible work of art, and well worth a special trip to see. 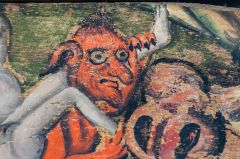 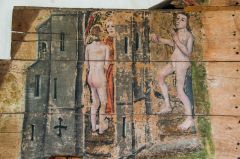 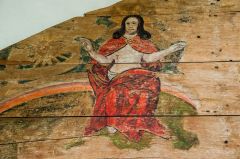 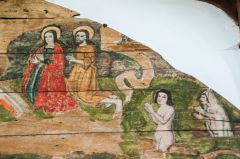 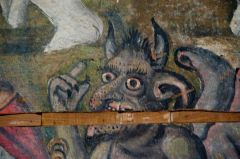 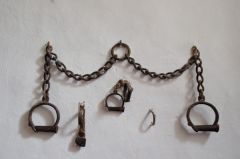