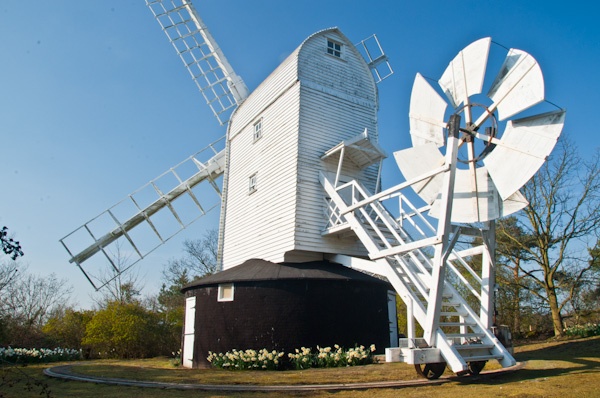 Holton Post Mill is something of a local landmark, the symbol of this attractive little village on the outskirts of Halesworth. The mill dates to the 1740s and was in use until 1910. It is an open-trestle post mill, meaning that the entire body of the mill rotates around a central pole to keep the sails pointing into the wind.

The only original pieces of machinery remaining inside the mill are the brake wheel and the central windshaft, made of cast iron.

The mill has been restored with help from the Suffolk County Council and is now open on Bank Holiday Mondays in Spring and August, and for National Mills weekend by appointment.

A path leads from the main road beside the drive to Mill House and allows access to the exterior of the mill at other times.

The mill was built in 1749 by John Swann and owned by William Fiske until 1761. After Fiske died the mill was sold to Brame Oxford, who operated it until 1781 when he was forced to declare bankruptcy. The next owner was James Tillot, who passed it onto his son John.

When John Tillot died in 1835 the mill was put up for auction. The auction particulars describe the existence of a roundhouse for the first time. The roundhouse appears externally to be one storey high, but it has been excavated inside to create a cellar level.

The auction was won by Samuel Wilkinson of Blythburgh, who kept it until 1851. It passed through several hands until it was put up for sale in 1885. The sale details show that an engine shed had been built beside the mill and house an auxiliary engine for times when wind was unavailable.

The mill went out of production in 1910 and was converted for use as a rather unusual summerhouse. It appears that the fantail was fitted at this time, so it seems that it was purely an aesthetic detail and was never actually used to help turn the mill into the wind.

The mill has replica sails, fitted in 1992. There are two spring sails and two common sails. Inside the mill are displays on the history of the building and an explanation of the mill technology.

The body of the mill is weatherboarded and is joined to a roundhouse made of brick covered with tar.

It can be tricky to see the sign to the mill; it is rather hidden to one side of the drive to Mill House. A wooded path leads to the top of the hill, where the mill is set in a clearing. It is a very attractive site, though in summer it can be hard to see the surrounding village due to the greenery.