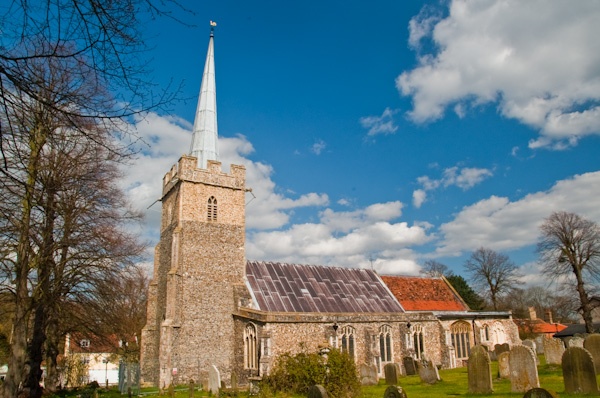 The pretty village of Yoxford is surrounded by fields and parkland on all sides, a fact which has earned the village the nickname 'The Garden of Suffolk'. One of those parks is Mulberry Park, just off the High Street. In the centre of the park is St Peter's church, easily glimpsed from a distance by its striking spire surmounted by the figure of a cockerel.

The church interior is mainly Victorian, the result of enthusiastic restoration, but amidst all the 19th-century furnishings is a wonderful collection of medieval and Tudor brasses.

None of the brasses are in their original locations; they have been gathered together and placed in groups along the church wall. The earliest is a brass to John Norwich (d. 1428) and his wife in the sanctuary. John Norwich owned Cockfield Manor in Yoxford, though he seems never to have resided there. The manor was sold and the proceeds used to rebuild St Peters in Perpendicular style, as we see it today. 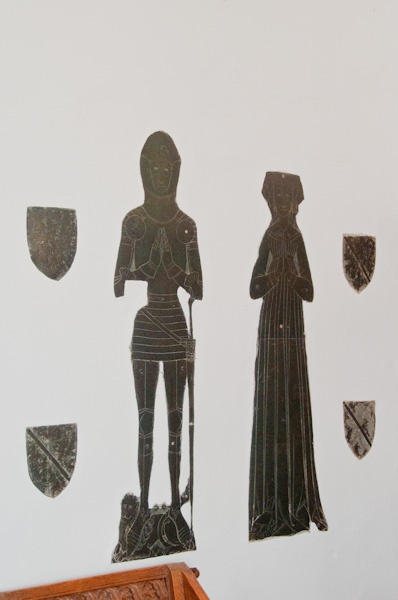 Also in the sanctuary are brasses to Thomasine Tendring (d. 1485) and her seven children. Tendring was the daughter of William Sydney, whose descendants owned Penshurst Place in Kent. The Tendring brasses are redolent with symbols of mortality. Thomasine is shown wrapped in her shroud, though the shroud is parted to display her legs and her head and torso. Five of her seven children are also shown in shrouds, a symbol that they died young.

Other highlights include a very finely carved early 15th-century font. In common with most East Anglian fonts it is made up of an octagonal bowl carved with angels, in this case alternating with quatrefoil symbols. The stem has a cluster of engaged shafts with panelling inset between them. 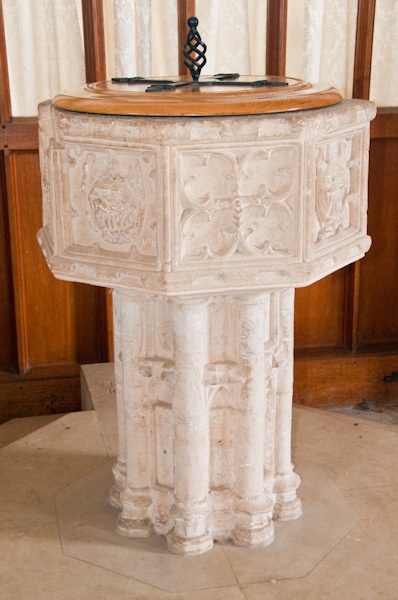 The pulpit is early 17th century and there is an early 18th-century organ in the north chancel aisle. Under the tower are funeral hatchments to the Blois family, lords of the manor. There are several memorials to members of the Blois family on the walls, including one to Sir Charles Blois, sculpted by Thomas Thurlow. The south chancel aisle roof is decorated with painted shields of the Hopton, Brooke and Blois families of Cockfield Hall.

One resident of Cockfield Hall who is not represented here is Lady Katherine Grey, sister of Lady Jane Grey, the tragic Nine Days Queen. After her sister's execution Lady Katherine was placed in prison, then under house arrest, doomed by her unwitting connection to the failed plot to place Lady Jane on the throne in place of Mary Tudor. She died at Cockfield Hall of tuberculosis in 1568.

St Peter's was the subject of a sketch by artist Cornelius Varley (1801), now held at the Courtauld Gallery in London.

Though much of the interior is 19th century, the collection of brasses and the beautifully carved 17th-century pulpit make St Peter's a very enjoyable church to explore. The church is normally open daylight hours and was open when we visited. 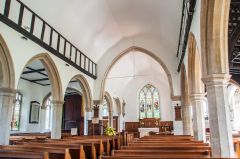 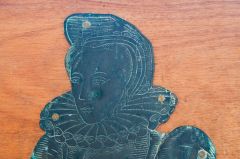 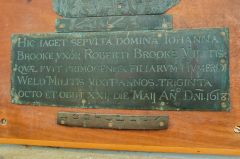