HERITAGE HIGHLIGHTS:   Norman carving of a winged beast over the south door 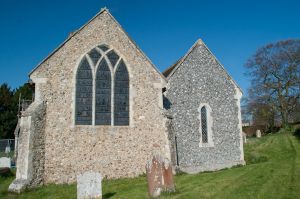 The church of St Peter at Holton is a striking building sitting on a small rise over the main Beccles Road through the village. The church is composed of a nave, chancel, south porch, and a lovely, slender round tower, one of the prettiest in the area. There are 42 round tower churches in the county, and Holton's is one of the tallest.

The bottom portion of the tower is Norman, dating to at least the early 12th century, with the top a later addition. Though we can be reasonably certain of the dates, there may be parts of the church dating to AD 950 or even earlier.

The core of the nave is Norman, and it is entered through a 12th-century doorway. Over the doorway is Holton's greatest feature of historic interest, a Norman carving of a peculiar winged beast. The carving may depict a horse, a bull, or a dragon, though that is conjecture - it could equally well be something completely different!

It is depicted with its jaws wide; if it was a donkey I would say it is shown braying for all it is worth. The moulded capitals of the doorway columns are carved in traditional Norman style.

The font is 15th century, in Perpendicular style, with an octagonal bowl with alternating panels of flowers and blank shields. Much more modern is the east window, with Victorian glass from the famed Kempe studio. There is also a memorial to American servicemen killed while based at Holton Airfield.

St Peter's is an attractive building in an equally attractive village. A short walk away is a wooded hill with an old restored post mill at the top.